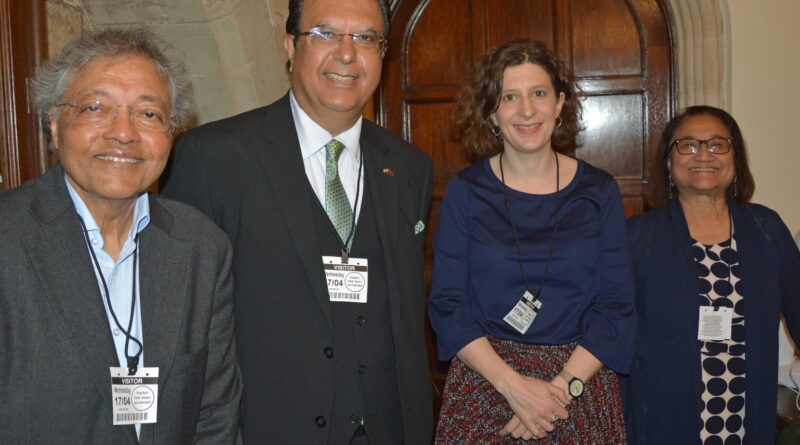 For video highlights of the debate go to https://youtu.be/R90hGZJ7LDY

The 2019 election in India, the world’s largest democracy, would inevitably be seen as a referendum on the charismatic Narendra Modi, who took power five years before in the most “presidential” poll in modern Indian history.

A distinguished panel, chaired by CJA-UK president Rita Payne, reached this consensus when the election was discussed at the Commonwealth Parliamentary Association on March 17, a few days after the Indian polling juggernaut began rolling. With 900 million people eligible to cast their ballots, voting was taking place over seven phases, with the result due more than a month after the start of the process.

Despite the fact that Indian voters tend to overturn the previous election result more often than not, most of the panel expected Modi to retain power. Louise Tillin, Reader in Politics at the India Institute, King’s College London, pointed out that the Prime Minister did not gain an overall majority five years ago, however, and she did not expect him to do so this time.

The make-up of Modi’s Bharatiya Janata Party (BJP)-led coalition could be very different after this election, Dr Tillin added. In 2014 the party swept the “Hindu belt” across northern and western India, but had since lost support in this area. It would have to break new ground in the other parts of India, where regional parties tended to hold sway, accounting for about 180 of the 543 seats in the Lok Sabha (lower house of parliament).

John Elliott, a journalist who reported for more than 25 years from New Delhi for the Financial Times, Fortune and The Economist, among others, saw the election as a crucial turning-point. India had to decide whether it was a primarily Hindu nation, in line with Modi and the BJP’s Hindutva ideology, or a secular state in the tradition of the Gandhi dynasty and the Congress party.

In 2014, voters had hoped that Modi would be as effective as he had been at the regional level in Gujarat, and that his Hindu nationalism would take a back seat, said Elliott. But he had let Hindutva supporters run riot, while his economic achievements fell far short of the claims made for them. The Prime Minister had failed to create new jobs, reform the banking system or privatise public sector enterprises, and his “demonetisation” exercise – removing all 500 and 1,000-rupee notes in an effort to drain black money from the economy – was a “disaster”.

While Congress had produced a sensible and coherent manifesto, the journalist added, the opposition alliance had no obvious candidate for prime minister. Rahul Gandhi, the latest scion of the dynasty, had “never proved himself”.

Deepak Lalwani, an Indian-born, London-based stockbroker and investment consultant, also expected Modi to gain another term – the favoured result, on balance, of the business world. The BJP was likely to win fewer seats, however, making it much harder to push through economic reforms.

Lalwani took a more positive view of Modi’s economic record, crediting him with having improved “brand India”. The ease of doing business had greatly increased. Inflation and interest rates had dropped, while the stock market was at record levels, demonstrating foreign confidence. Though demonetisation and the chaotic introduction of a general sales tax had depressed the jobs market – India needs to create a million jobs a year to absorb its youth population – there were positive signs as well, such as the creation of 340 million new bank accounts under the Aadhaar system.

The fourth speaker, Indian-born author, journalist and former BBC TV sports editor Mihir Bose, focused on the political and cultural impact of Modi and his Hindutva philosophy, which “made the [Hindu] majority feel like a threatened minority”. It was a reaction against the militant secularism of the Nehru era, which in Bose’s opinion had gone for good. Even in traditionally left-wing areas such as West Bengal, the BJP was now the main opposition, and the city of his birth was becoming segregated by religion.

The panel did not see foreign policy as prominent in the election campaign, though the recent clashes in Kashmir had enabled Modi to “play the strongman”, in Lalwani’s words. The Prime Minister’s extensive foreign travels consisted mainly of “ego trips”, said Elliott. In Bose’s view, anti-Pakistan sentiment had never been higher in India, making Indian Muslims more fearful as well.

All in all, the outcome of the election was likely to reflect a more sober view of Modi and the BJP than in 2014, when there had been unrealistic expectations of a landslide, according to Lalwani. And Dr Tillin said Congress should not be written off. Although it had no answer to the BJP’s successful identification of Hindu nationalism with economic development, it had exceeded expectations in regional elections, especially among rural voters.

Congress was still the only pan-Indian opposition to the BJP, the academic concluded. “There is still life in the old machine.”