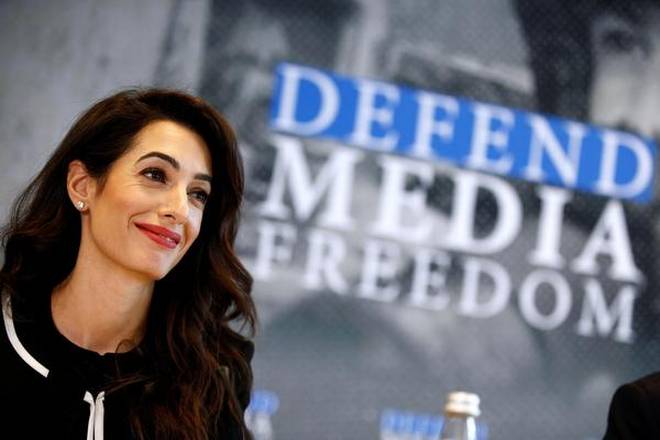 The London Media Freedom   Conference, hosted by the British and Canadian governments, took place at the Print Works in East London on 10 and 11 July. It was extremely ambitious in its scope, with 1500 delegates from all over the world, and four or five parallel sessions running throughout the two days, as well as several plenary ones.

Those attending included ministers from many different governments, the DG of UNESCO, UN rapporteurs, academics, journalists and broadcasters and most leading international media organisations, such as RSF and CPJ, many of which had taken stalls to display their publications or show their broadcasts.
The British Government, as chair in office of the Commonwealth, had also invited all Commonwealth foreign ministers to London during the same period. They attended a plenary session on the morning of the second day addressed by the then-Foreign Secretary, Jeremy Hunt, the Canadian Foreign Minister, representing Canada as co-host, Chrystia Freeland, Amal Clooney, the Foreign Secretary’s special envoy on media freedom, and Gobind Singh Deo, the Minister of Communications and Multimedia from Malaysia.

The two Foreign Ministers and Harriet Baldwin, junior minister at both the FCO and DFID, made announcements of new funding for the media amounting to nearly £20 million. Jeremy Hunt pledged £3 million and Chrystia Freeland one million Canadian dollars for a Global Media Defence Fund to be administered by UNESCO, which will take forward the UN Plan of Action on the Safety of Journalists and provide safety training for journalists working in conflict zones.

Other countries were also invited to contribute to the fund – https://en.unesco.org/news/unesco-welcomes-establishment-global-media-defense-fund-initial-funding-uk-and-canada .

Britain also earmarked £15 million for a fund to protect independent media. £12 million has been given over four years to a consortium of ten partners led by BBC Media Action to strengthen independent media in Bangladesh, Ethiopia and Sierra Leone – https://www.bbc.co.uk/mediaaction/about/media/press-media-action-lead-media-development-consortium .  A further £3 million has been awarded to the Institute for War and Peace Reporting to strengthen media in the Middle East and North Africa.  These awards announced at the conference are on top of £12 million which DFID announced in March to ‘protect rights openness and transparency’ and to enhance civil transformation.

Governments attending the conference were invited to sign a global pledge committing them to join a coalition to defend media freedom, to reach out to journalists at risk and to work with governments to find solutions. The pledge is on the FCO website, though there are no details of those who signed –  https://www.gov.uk/government/publications/global-pledge-on-media-freedom
Governments attending the conference were also provided with an opportunity to make a statement on their national policy towards media freedom and the safety of journalists. A summary of the statements made by different countries, including the Foreign Minister of Rwanda, can be found at: https://docs.google.com/document/d/12KViym36ORTzsks-udY4J0gNrNu1NY4sDqANG9zT-BQ/edit#heading=h.20fxos9lkheiand .

Amal Clooney, who made two impressive statements at the conference, has convened a panel of legal experts from across the world, which will provide legal support in specific cases where media freedom is under threat. Lord David Neuberger, former President of the UK Supreme Court, will be the chair of the panel and Amal Clooney will be Deputy Chair. Jeremy Hunt has said the panel comprises ‘the best legal brains from across the globe’. It includes several prominent Commonwealth lawyers, including Irwin Cotler from Canada, Hina Jilani from Pakistan, Karuna Nundy from India, Ms Catherine Anite from Uganda and Helena Kennedy from the UK – https://www.gov.uk/government/news/lord-neuberger-and-amal-clooney-announce-media-freedom-legal-panel-members .

Jeremy Hunt also announced plans to set up an International task force to support media freedom, with an objective to help countries to develop media action plans, and a contact group of like-minded countries which will act as a rapid response unit when media freedom comes under attack.

On the eve of the conference, 33 media and journalists’ organisations, including the CJA, CHRI and SAMDEN, issued a statement calling on governments to release all imprisoned journalists, to stop attacking or denigrating journalists and to investigate and prosecute all murders of journalists. These demands were later expanded in a statement by 36 organisations, which called on governments to expedite Access to Information Laws, to transparently expedite the implementation of the UN Plan of Action and to ensure that all media workers, not just journalists, were included in the provision of training and support – https://www.ecpmf.eu/news/press-releases/defend-media-freedom-new-pledges-not-credible-without-action .

The packed conference programme included three or four sessions each day on four themes: Protection of Journalists, National Frameworks and Legislation, Building Trust in Media and countering disinformation, and Media Sustainability. There were also several sessions looking at particular regions of the world, including Africa, the Middle East and South East Asia, though not South Asia.

The session on Strengthening Media Freedom in the Commonwealth took place in the afternoon of the second day. The session was chaired by Julie Bishop, former Foreign Minister of Australia. The panellists included the Foreign Ministers of Rwanda and Jamaica, the Information Minister from Ghana, Zoe Titus from the Namibian Media Trust and Desmond Browne, QC from the Media Principles Working Group. All the panellists had been sent the Commonwealth Media Principles in advance and several spoke approvingly of them. Kamina Johnson-Smith, the Jamaican FM, talked about freedom of expression as a treasured possession and expressed satisfaction that Jamaica is 8th in the RSF league tables. She highlighted the fact that Jamaica had decriminalised libel in 2013 and had introduced an Access to Information Act. She described the Principles as ‘an excellent road map’ and said she hoped they would be adopted at Kigali.

The Rwandan Foreign Minister, Richard Sezibera, painted a positive picture of the transformation of the Rwandan media after 1994, when President Kagame assumed effective power after bringing the genocide to an end. He made no specific reference to the Principles but he said his government was committed to the promotion of freedom of expression. Since 2013, the country had liberalised the media, decriminalising libel, introducing right to information legislation and moving from statutory regulation to self-regulation. It was also investing in extending digital access to the entire country.

He said Rwanda supported the safety of journalists, and the Commonwealth would find it a committed partner in this matter. But he said freedom of speech did not extend to denial of the genocide: that was a red line for the government. He pointed out that the Rwandan media had played a part in unleashing the genocide and he said it was important to prevent freedom of expression being used to promote hate speech. Asked to comment on the demand by media organisations that all imprisoned journalists should be released, he said if journalists were in jail because they had committed crimes, that was a different matter and they could not be released.

The Ghanaian Information Minister, Kojo Oppong Nkrumah, spoke about the ‘robust framework’ in his country which promotes free media work. He said even the state-controlled media were editorially independent. Ghana had hundreds of publications, 50 TV stations and over 300 radio stations and that made for a very dynamic environment. The country had also recently enacted Right to Information legislation. The main challenge was social media and the country needed help in developing frameworks to regulate it. They had also started a media capacity enhancement programme to promote better quality journalism. He said the aim was ‘to have less of what we don’t want to see’ and he hoped the new Global Media Defence Fund would be used for such training purposes.

Desmond Browne gave a very clear presentation introducing the Principles and explaining the collaboration of the six Commonwealth organisations which had produced them. He underlined the fact that they built on existing Commonwealth declarations on freedom of expression and the work of the Latimer House working group. He also said they tried to strike a proper balance between the responsibility of journalists and the right to freedom of expression. He also said the working group hoped they would be adopted by the Commonwealth as a cogent set of standards for governments and for practitioners. He pointed to the threats to media freedom even in countries with otherwise positive records and in reply to a question from the Chair, he said he thought the Principles were universal enough to be used by countries outside the Commonwealth as well.

Zoe Titus of the Namibia Media Trust, which supports independent media in that country, said she would prefer the adjective ‘professional’ rather than ‘responsible’ to be applied to journalism. Drawing parallels with the African Declaration on Freedom of Expression, which was adopted in 2002, she described the Principles as ‘a brilliant exercise’ and very useful for civil society from an advocacy perspective. She also praised the treatment of the media within the framework of governance, pointing out that the independence of the judiciary is critical for the upholding of freedom of expression.

Members of the Commonwealth working group who attended the session were pleased with the positive airing which the Principles received from the panel and the audience. The Foreign Minister of Jamaica welcomed the Principles in very complimentary terms and we must hope that Jamaica’s lead will be followed by other Caribbean countries. The Rwandan Foreign Minister, while stressing the country’s unique and complex history and its red lines on the issue of the genocide, underlined the liberal reforms which have been introduced and the country’s willingness to work with the Commonwealth on the safety of journalists. The session was well attended by Commonwealth journalists and academics, who were provided with copies of the Principles and encouraged to support them and share them with colleagues in their own countries.