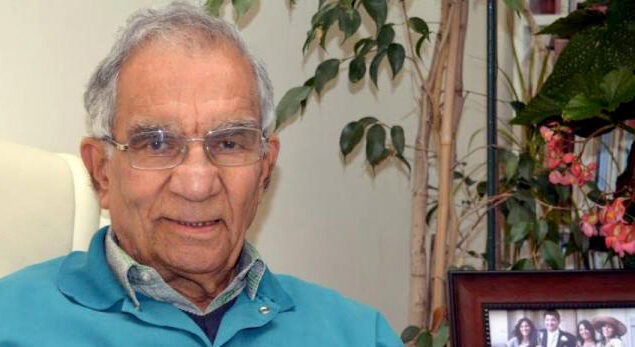 CJA members will have heard the sad news of the death of Kailash Budhwar, former head of the BBC Hindi Service who had been a keen and regular member of the CJA almost since it was formed.

He had already been missed from CJA meetings in the months before lockdown and we had been wondering about his absence. I had thought that he might have been in India when the Covid travel restrictions kicked in and that he was sitting it out there. But we now know that he had been in and out of hospital. Illness was not something one associated with Kailash and it is a loss to us all that he will not be back.

Kailash had joined the BBC at almost the same time as me. As fellow neophytes I shared with him the experience of induction in our different roles into the routines and ethos of BBC World Service broadcasting, learning from him and his then Hindi Service colleagues as he learned from them and our tutors in BBC Training. The regular Eastern Service studio technicians who recorded his news presentations and other programmes knew him familiarly as ‘Mr Wednesday’ as his name Budhwar in Hindi prompted.

The communication skills which led to his popularity both as a broadcaster and as a colleague had been honed from his experience in India as a teacher and a performer. At one time he had had ambitions to join the Bollywood film world and he used to talk about that just a little wistfully. I would say that as a broadcaster his primary interests remained social, cultural and educational. His default mode was cooperative and non-confrontational, though Kailash’s characteristically emphatic ‘Quite right’ sometimes left one feeling that he felt the point was just not worth arguing about.

He was not absorbed in political controversy and analysis as were so many of the distinguished Indian print journalists who were very much part of the BBC’s news sourcing network. At one time BBC Hindi journalists, working for a British news organisation, were not regarded as ‘proper Indian journalists’ by our near neighbours in the Indian High Commission, or by some of their colleagues who represented Indian papers in London. Some saw this as an implied snub, but if it was, it was worn by Kailash with good humour and dignity.

From 1976-77 onwards with the BBC’s coverage of Mrs Gandhi’s Emergency regime the Hindi Service’s measured audience swelled to 35 million listeners, the largest of any BBC service. Ironically as Kailash’s own broadcasting career developed there was a great deal more original journalistic input from BBC correspondents throughout India previously known as ‘stringers’. Their first-hand reports and two-way interviews in Hindi became a distinctive and important part of BBC news coverage. As head of the Hindi Service, or Programme Organiser as it was then styled, Kailash had an important managerial and editorial role in developing this new source of news and integrating it into the wider BBC news coverage. He also had editorial and managerial responsibilities for the BBC Tamil Service, a small but dynamic and almost self-sufficient unit, which like the Hindi Service had a massive impact both in India and Sri Lanka.

Sartorially Kailash did not do casual. Ironically, on one occasion when the then head of the Eastern Service Jim Norris invited some of his senior colleagues to a meal at the Oxford and Cambridge Club in Pall Mall, most of were formally kitted with suit and tie. Kailash wore an extremely smart suit and polo-necked shirt in a striking green and yellow combination which showed us up as conventional ‘BBC suits’.

But Club rules stipulated that a tie had to be worn, and Kailash was offered a shirt and tie kept by club management for just such an eventuality. He might have taken umbrage but he changed with the same good humour that he was known for. I would add to this the warm and genuinely impressive image of Kailash in his vigorous advancing years as a family patriarch, immensely proud of his children and grandchildren and their achievements, in particular the success of his daughter Mamta Kash as a TV actress, which had so chimed with his own early acting ambitions.

Our sympathies go to his family on their loss, which is also ours.

CJA President Emeritus Rita Payne adds:  I had the pleasure of working with Kailash during my many years at BBC World Service Radio and later when I became Asia Editor at BBC World TV News. Kailash was regularly interviewed on BBC radio and TV programmes about major developments in India and South Asia. His calm, objective and informed analysis was highly valued, especially at times of crisis when it was difficult to get reliable news about what was happening on the ground. Kailash was also a long-standing and supportive member of the CJA and regularly attended our meetings and other activities. He will be deeply missed.