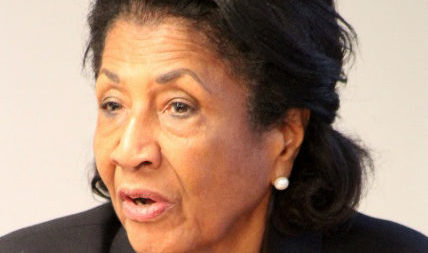 The death of Patsy Robertson on August 18, only two years after the death of her friend Derek Ingram, is a reminder of how much Commonwealth journalism owes to a handful of stalwarts who see enduring value in the Commonwealth and the power of free, honest expression. However unlike Derek, Patsy, a Jamaican, was only briefly a journalist.

After graduating in New York at the end of the 1950s she was taken on as a young reporter in Kingston by the Jamaica Gleaner where her charm and energy won friends. It was a period when reporters would go down to the harbour to interview celebrities, shipping in from London and New York. But with independence in 1962 other opportunities beckoned. She joined the newly established Jamaican High Commission in London as an information officer and from there, three years later, she was lured to the new Commonwealth Secretariat by Arnold Smith, first Secretary-General.

This was an inspired move. For almost 30 years, under three Secretaries-General, she was the voice of the Commonwealth, establishing rapport with journalists throughout the world, supporting young ones, and notably working as the spokesperson of Shridath Ramphal in his epic battles with the Thatcher government over Rhodesia-Zimbabwe and apartheid South Africa. Just as you knew that information from Bernard Ingham was as good as talking to Margaret Thatcher, so if you listened to Patsy Robertson you could trust that it was precisely what Ramphal thought.

She rose to be head of information at the Secretariat, but never lost her affinity with journalists. She was with Ramphal at the Dalhousie University conference in 1978, of Commonwealth professionals, which led Ingram, Patrick Keatley and others to found the CJA. She supported Derek in finding solutions for his Gemini News Service, when it temporarily ceased publication, and she managed the Commonwealth Media Development Fund to train young journalists. In all this she remained affable, amusing, elegant.

After retiring from the Secretariat in the early 90s she had another spell in New York, a city she loved, doing information work for UN Women, attending the Beijing women’s conference in 1995. But she never really retired, chairing trustees of the Ramphal Institute from 2007 until her death, active on widows’ rights, trustee variously of the Thomson Foundation and the Commonwealth Press Union Trust, and much-loved Chair of the Commonwealth Association, the body of former employees of the Commonwealth Secretariat and Foundation.

She was passionate for developing countries, and also a huge admirer of the Queen as Head of the Commonwealth. Until very recently she refused to obtain a British passport, her commitment to Jamaica requiring her to trudge round European consulates whenever she wanted to cross the Channel. Where others saw civil society links as the road to the survival of the Commonwealth she emphasised the importance of governments, and the collective decisions of governments. She was saddened by the withering away of Meetings of Heads of Government, recalling the lengthy informal discussions they had in the 70s and 80s.

She died just ten days short of her 87th birthday, leaving three children and one grandson; her husband predeceased her. Tributes have poured in since her death, with people recalling acts of kindness, her sense of humour, and all they had learnt from her. Working with her at the Ramphal Institute I was one of the many beneficiaries of her friendship and knowledge.  Sir Shridath Ramphal, writing immediately after news reached him in Barbados, summed up the feelings of many — ”The Commonwealth sky clouded over as Patsy Robertson left us.”

Another former Secretary-General,  Chief Emeke Anyaoku, said in  a statement: “I remember Patsy as a true symbol of the modern Commonwealth who served the organisation with passion and unflinching dedication during her many years in office at the Secretariat and afterwards as a driving force at the Commonwealth Association of former Secretariat staff.”

He added: ”By the passing of Patsy Robertson, the Commonwealth has lost a devotee who worked throughout with singular fervour to support the structures and who never minced words in criticising actions or pronouncements by governments that she perceived as undermining the principles and values that animate the modern Commonwealth.”

This appreciation of Patsy Robertson by Victoria Brittain, courtesy of The Guardian:

Patsy Robertson, who has died aged 86, was a prominent figure in the historic turning of the tide against Margaret Thatcher’s support for apartheid South Africa by the Commonwealth leadership, headed by Sir Shridath (Sonny) Ramphal.

As Ramphal’s trusted confidante Robertson helped to shape a new UK mainstream narrative: that apartheid could not be reformed, but instead had to go. Official spokesperson for the Commonwealth from 1983 until 1994, and also director of information at the Commonwealth Secretariat from 1988, she was a brilliant communicator whose clarity and charm came to be trusted by the media, politicians and Buckingham Palace.

She was poached into working for the Secretariat by the first secretary general of the Commonwealth, Arnold Smith of Canada, and when he was succeeded in 1975 by Ramphal, a former foreign minister in Guyana, a significant shift in outlook began to play out.

A web of subtle defiance of UK policy emanated from the Secretariat’s grand Marlborough House offices in London. Staff visited South Africa, and Patsy’s vast network of journalists were briefed on the realities hidden beneath misinformation by South African officials. She was also the facilitator par excellence of discreet meetings for journalists and politicians ready to listen to other narratives from opposition leaders risking their lives, and to anti-apartheid voices from Scandinavia to Hollywood.

At Commonwealth summits, with her facts and her gentle charisma, Patsy proved a devastating rival to Thatcher’s tough spokesman Bernard Ingham. While Thatcher spoke of the African National Congress as “terrorists” and refused to meet any of the internal opposition who came to London, the Commonwealth led the English-speaking media into turning the tide of opinion.

By 1986 Thatcher had been slowly ambushed, with the UK in a minority of one within the Commonwealth in its opposition to economic sanctions against the apartheid regime. In short order her ally Ronald Reagan also found himself isolated as he saw his presidential veto of a sanctions act over-ridden by Congress, thanks to the work of the Congressional Black Caucus and black celebrities such as Harry Belafonte, whom Patsy knew from her early New York civil rights days.

That year a team of Commonwealth leaders called on the apartheid authorities to put in train four actions: free Nelson Mandela, unban the ANC, release political prisoners and hold free elections. The following year the South African government began secret negotiations with the ANC, while Thatcher was still publicly stating that the idea of Mandela’s party ruling in South Africa was absurd. However, by the time she left office in November 1990, Mandela and other political prisoners had been released and the ANC was unbanned. Democratic elections were held in 1994, and the Commonwealth viewpoint had prevailed.

Patsy was born in the Malvern district of Saint Elizabeth parish in Jamaica, the fifth child of eight. Her mother, Ina Weston, was a teacher. Her father, Austin Pyne, was headteacher of Glengoffe secondary school, but also started a loan bank and spent his spare time coaching children of poor families for the chance of college in the US. Patsy went to Woolmer’s high school for girls in Kingston.

All the Pyne children went on to further study in the US or the UK, and in the early 1950s Patsy chose New York University, where she studied journalism and English, graduating with a liberal arts degree. Her circle in New York included James Baldwin, and her memories of him and admiration of the rage in his writing always remained with her.

Outrage against racism as she witnessed it in New York, in the UK, and above all in apartheid South Africa gave her a passion for action for change. Her vehicle was the rather staid Commonwealth Secretariat, the administrative hub of the Commonwealth, which, after a three-year period performing general duties at the newly formed Jamaican High Commission in London, she joined as press officer on its establishment in 1965. With an influx of 49 newly independent countries into the old white club of the Commonwealth, the newly formed Secretariat needed a new kind of administrator for its ambitious economic and social development plans, and Patsy fitted the bill.

After South Africa’s majority rule was overthrown, Patsy turned her formidable energy into trying to change another narrative – on the role of women. She was poached again, this time by the UN, to become senior adviser for the World Conference on Women in Beijing in 1995, using her media skills to highlight topics from women’s leadership roles to women’s poverty and the status of widows. She did it again for children in 2001 as senior adviser for Unicef at a UN special session on children.

In her final years Patsy was still active in her old areas of influence. She was chair of the trustees of the Ramphal Institute and the Commonwealth Association, and a trustee of the Thomson Foundation for training journalists, and the Commonwealth Press Union Media Trust.

At her home in Belgravia, central London, she nourished a Caribbean profusion of orchids, bougainvillea and hibiscus in her sitting room and conservatory, and with her Scottish husband, Callum Robertson, whom she married in 1964, she entertained friends from every continent. She was also a regular attender at her local church, St Peter’s in Eaton Square, and often read the lesson there.

Callum died in 2012. She is survived by their children, John, Sarah and Neil, and a grandson, Jesse.