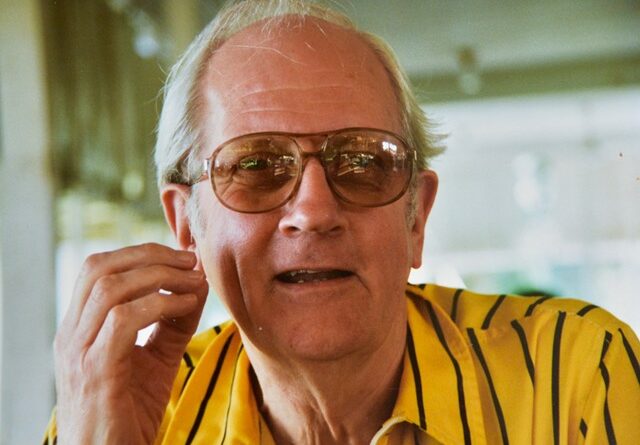 By LINDSEY HILSUM, Channel 4 International Editor, and an early protege of Gemini News.

Derek Ingram, who has died a few days short of his 93rd birthday, was a distinguished journalist and passionate supporter of the Commonwealth. In the 1960s, he gave up a successful career as a newspaper editor to start a news service that would reflect the views of people in newly independent African countries and elsewhere in the developing world.

He was on first name terms with leaders such as Indira Gandhi and Kenneth Kaunda, and was known to many as “Mr Commonwealth”.

The only child of a middle-class family, brought up in north London, Derek was successful immediately after leaving Highgate School, earning six guineas a week as a sub-editor on the Daily Sketch at the age of 17. When Derek was called up in 1943, the doctor carrying out his medical was so amazed to hear of a young man earning such a fortune, he stopped the queue of young recruits and went to tell his colleagues.

Derek served as a signalman in the Navy, stationed for many months in Malta. After being demobbed, he joined the Daily Express, but in 1949 jumped ship to the Daily Mail where he rose to deputy editor. He might have become editor, but his liberal politics and ferocious opposition to apartheid and racism in any form put him at odds with the paper’s proprietor, Viscount Rothermere.  He resigned in 1966, but not before making his views known in Partners in Adventure, one of five books he authored.
“Two problems above all torture our minds in this second half of the 20th century,” he wrote. “The first is the atomic threat to our civilisation; the second the relationship between the black man and the white. The greatest single factor about the Commonwealth idea is that it transcends all racial barriers.”

For Derek, such views were not just theory. In 1967, he founded Gemini News, a small syndication service that provided an alternative to wire services like Reuters by providing a platform for young journalists from the developing world. Gemini writers included a young Trevor MacDonald in Trinidad before he gained fame as a newsreader in the UK.  A package of six articles, covering everything from politics to healthcare, education and art, copied on a Gestetner machine, was sent out by mail twice a week, Derek himself stuffing the envelopes alongside a small, overworked staff. Because of Gemini, newspaper readers in Malaysia, for example, could read articles by journalists from Kenya and vice versa.

“Eventually the peoples of the world must be colour-blind”

Gemini pioneered the use of graphics and explanatory maps, which later became standard in newspapers. Derek’s journalistic instincts were more acute than his business sense, and the newspapers that subscribed paid nowhere near enough for a unique service. When journalists complained that the fees Gemini paid were derisory, Derek would bark that they should do it for the good of journalism and no-one else was protesting. (In fact, there was a drawer full complaints from struggling young reporters.) Still, for many it was an opportunity to be published that they could get nowhere else, and Derek would champion young reporters, especially those who came from Commonwealth countries where journalism was in its infancy.

While running Gemini, Derek continued to report on the Commonwealth, covering 20 Heads of Government Meetings, stopping only in 2007 when ill health intervened. He was among the last foreign correspondents to interview the Indian Prime Minister, Jawaharlal Nehru, before his death.  He never name-dropped, but other journalists envied his access to post- Independence African leaders like Julius Nyerere and Kenneth Kaunda, who would listen to Derek’s views on Commonwealth issues, knowing that he understood the politics better than almost anyone else. He also got to know Thabo Mbeki and other politicians who would go on to govern post-apartheid South Africa.

In 1978, Derek co-founded the Commonwealth Journalists’ Association, of which he remained President Emeritus until his death. He received recognition from several Commonwealth bodies and in 1998 was awarded an OBE for services to the Commonwealth and to journalism.

Derek loved parties, as well as going to the theatre and concerts. He never married, nor had children, but was close to his godson, Nick Hall, the son of the Observer Commonwealth Editor Richard Hall, and Nick’s wife, Alison. They cared for him until his death, alongside his devoted house-keeper, Helen Hayes. In his latter years, when he found it difficult to move, his neighbours would frequently drop by the mews house near Baker St where he lived for much of his adult life. Right up until the last few months of his life, he would read the newspapers every morning and watch Channel 4 News at 7pm.

“Eventually the peoples of the world must be colour-blind,” he wrote in 1965. “The Commonwealth is there as an instrument to this end, and all of us must try to use it.” While others denigrated it as a diplomatic talking shop, or an association of rogues, Derek, like the Queen, believed in the Commonwealth as a force for good. It was a faith he never lost.