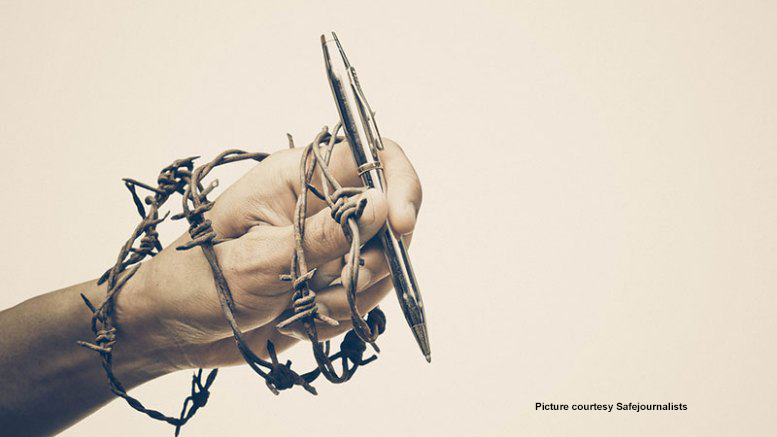 The Commonwealth Journalists Association warmly welcomes the report of the Independent High-Level Panel of Legal Experts on Media Freedom and urges Commonwealth governments to implement its detailed recommendations to provide safe refuge to journalists at risk. Endorsing the report, Mahendra Ved, President of the CJA, said: ‘ This is a timely report which offers some very practical solutions to the dilemmas faced by a large number of journalists in today’s world who are increasingly under threat from state and non-state actors and in fear of their lives for just doing their job.’

The report’s nine recommendations, which are addressed to states world-wide, include the introduction of an emergency visa for journalists at risk and their immediate families and the issuing of travel documents to relocated journalists if their passports are revoked or cancelled by their home countries. Another recommendation is that states should legally recognise journalists at risk as refugees under the terms of the international Refugee Convention and that they should be permitted to apply for refugee status from within their home countries, something which is not currently possible. The report further recommends that Interpol should require states to specify whether the subject of a Red Notice, seeking extradition, is a journalist in order to guard against the victimisation of journalists who have been given refuge abroad.

The 121 page report authored by Can Yeginsu, a member of the Panel, looks in great detail at existing pathways which journalists at risk can pursue in their efforts to gain safe refuge abroad, and concludes that none of them provides a speedy remedy for the immediate dangers they face. The report provides graphic details of the increasing pressures on journalists in many countries. Between 2010 and 2015, over 450 journalists were forced into exile under threats of imprisonment or violence. The number of journalists being detained is rising annually and stood at 389 last year according to Reporters without Borders. The number missing – 65 in 2018 according to the Committee to Protect Journalists – has also nearly doubled in a decade. The report also provides fifteen individual case studies, three of them from the Commonwealth – from Bangladesh and Pakistan – which illustrate these pressures and the inadequacy of current legal pathways in many countries.

This is the third report of the Independent High Level Legal Panel set up in 2019 and backed by the Media Freedom Coalition established at an international conference in London hosted by the UK and Canadian Governments. So far, forty governments have joined the coalition and signed the Global Pledge on Media Freedom, though only six are from the Commonwealth. These are Botswana, Canada, Ghana, Maldives, Seychelles and the UK. A final recommendation of the report is that among these countries, regional champions should be appointed for two-year terms to ‘spearhead the provision of safe refuge for journalists at risk’.

Why state action is needed to protect media freedom

Can Yeginsu, a member of the High Level Panel of Legal Experts on Media Freedom , says “concrete changes” in the actions of states are needed to reverse a marked decline in media freedom standards worldwide. The Panel’s core goal is to bring about a higher level of compliance by state authorities with the framework of international legal protections for journalists. The leading human rights lawyer spoke at an online meeting with international journalists hosted by William Horsley, the UK Chairman of the Association of European Journalists and International Director of the Centre for Freedom of the Media .

At 39 years of age, UK-based lawyer Can Yeginsu is one of the more youthful members of the panel of leading international lawyers appointed last year in a much-publicised bid by the governments of the UK and Canada to counter what they termed a “global assault on media freedom”. He spoke to a virtual meeting hosted by the AEJ UK Section on 2 November on the theme of “Media Freedom and the rule of law: What’s the connection?”

The theme echoes a key concept at the heart of the international campaign launched with much fanfare in London in July, 2019: that media freedom and the rule of law are inextricably linked and inter-dependent as the twin pillars needed for rules-based and democratic societies.

Can Yeginsu has taken important press freedom and human rights cases to courts all over the world. He is currently defending the award-winning Philippino journalist Maria Ressa, the editor of the leading independent news portal Rappler, against libel and other criminal charges that threaten her with a lifelong jail sentence.

Those charges have been widely denounced as politically-motivated. Many governments, he said, have used the Coronavirus pandemic as a pretext to silence critical media voices and suppress embarrassing truths.

For Yeginsu, the media stands at a crossroads. He has links with RSF (Reporters Without Borders), and cited RSF’s latest annual Press Freedom Index report which identified five “crises” for the world’s media:

Can Yeginsu demonstrated what he called the “symbiosis” between media freedom and the rule of law by recalling the historical examples of totalitarian governments — those of Nazi-era Germany and the repressive communist regime of the Soviet Union. In Nazi Germany, judges enforced the racist Nuremberg laws on the basis that they were legitimately adopted. For authoritarian leaders, Yeginsu said, the “rule of law” means rigid obedience to the law even if those laws are arbitrary. By that way of thinking even the mass transport of Jews to concentration camps was legal because it was the law. And under the constitution of the Soviet Union a range of civil and political rights were protected; but in reality basic rights can be violated at will if they are not protected by judicial independence and independent oversight bodies.

So, the true meaning of a state being “governed by the rule of law”, Can Yeginsu said, is that justice for wrongs against individuals can be accessed by all who seek it. It must be based on laws that are publicly made and proclaimed, as well as guarantees of judicial independence and mechanisms which are capable of testing the legality of government actions. And only a genuinely free press can fulfil that essential condition. Only when writers and journalists are free to comment on public affairs in the interests of informing the wider public can miscarriages of justice be exposed and corrected.

One prominent example of a free press playing that role in recent times was the actions of NGOs and journalists in challenging the legality of the UK’s mass data collection programmes. Details of those secret programmes were published in the Washington Post and Guardian newspapers, and in the end the European Court of Human Rights ruled that they were unlawful because they lacked the necessary oversight mechanisms and safeguards to protect privacy rights.

Thus the role of independent judges and lawyers can be the same as that of a free, independent press: both are necessary to enable people to assert their rights and hold the powerful to account. Governments can seek to increase their grip on power by controlling the media and other independent institutions, and by taking action against independent lawyers and judges. The rule of law and media freedom are in effect the two pillars that give effect to the protection of fundamental rights and both are indispensable, he concluded.

Can Yeginsu then outlined the work of the 15-member High Level Panel of Experts on Media Freedom. The Panel has undertaken to publish authoritative reports on six topics or themes, with advice and recommendations for governments which are intended to prevent and reverse abuses of media freedom. He stressed that the Panel is working in coordination with an extraordinary inter-governmental campaign in support of the same goals, in the form of a Global Media Freedom Coalition of (so far) 38 UN member states, which was established on the initiative of the UK and Canada.

Yeginsu is taking a lead in writing the Panel’s Report on Providing Safe Refuge to Journalists at Risk.  The issue is critical, he said, because for many journalist the framework of protection for them that exists in international law “doesn’t work”. Many journalists face real threats to their safety because of their work but face huge obstacles and so are unable to escape to a place of safety. The report would seek to put in place an effective system to provide that safe refuge. It would also promote a more effective “investigative tool” to address abuses against journalists in their home countries.

Finally, Can Yeginsu remarked that the Panel’s in-depth analysis of the issues had found a marked deterioration in compliance with international standards on protecting media freedom, even among states which had traditionally enjoyed a strong reputation regarding media freedom. In view of that, he said, the Panel’s work could only be meaningful if it results in concrete changes in the actions of states. And it was important that enough states are seen to act on the Panel’s concrete recommendations.

“We need to incentivise other states to follow good practice”, Yeginsu concluded, “and for that we need to find leader states: that is why compliant states have to show leadership”.

See here for more information on the work of the High Level Legal Panel.

This event with Can Yeginsu was held on 2 November 2020. In 2013 the UN General Assembly declared 2 November as the International Day to end Impunity for crimes against journalists