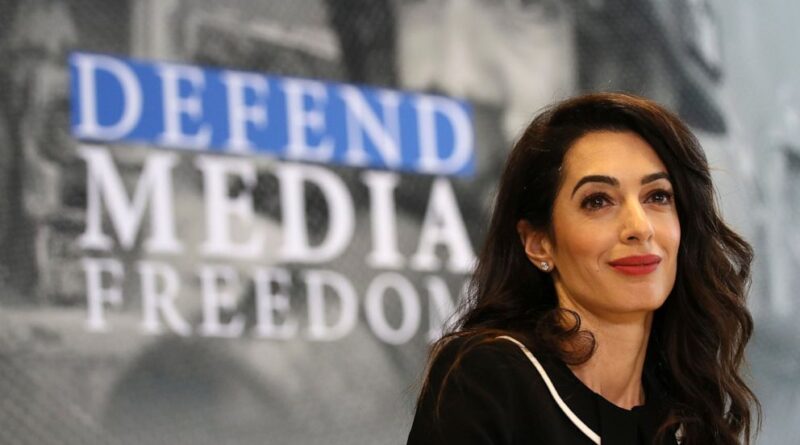 The CJA-led campaign in favour of the Commonwealth adopting the 2018 “Principles on media and good governance” has received a boost from the top international human rights lawyer Amal Clooney. Ms Clooney heads a Panel of top legal experts for media freedom that has been set up to produce an authoritative set of recommendations for strengthening protections for journalists at risk worldwide.  Amal Clooney spoke at Chatham House in London to launch a Panel report on the use of international sanctions to protect journalists.

She was asked a question about the habitual reluctance of many states – and of intergovernmental organisations like the Commonwealth – to take concerted actions and take a public stand against the tide of attacks against journalists. Was there not a risk, she was asked, that  the Commonwealth’s silence and inaction on the issue would help to ‘normalise’ the persecution of journalists and encourage impunity?  She replied:

“The UN system is not working as it should to enforce states’ compliance with the necessary protections for journalists, so we need a global ‘coalition of the willing’.  The Commonwealth Journalists Association has developed a strong set of Principles on media and good governance. And it would be very helpful if that could be adopted by Commonwealth heads of government at the next CHOGM meeting [in Kigali, Rwanda, in June 2020]”.

Amal Clooney first addressed the Commonwealth’s role – or the lack of it  – in protecting media freedom and the safety of journalists when she spoke at a meeting in the UK Parliament on January 21st on the theme ‘Is the Commonwealth serious about media freedom?’. That meeting was jointly supported by the CJA and the Institute of Commonwealth Studies (ICWS) as well as several groups of UK parliamentarians. The Commonwealth Principles on media and good governance [See www.cja-uk.org] were jointly agreed and published before the 2018 London CHOGM by six Commonwealth Organisations, including the CJA, the ICWS, the Commonwealth Lawyers Association and the Commonwealth Human Rights Initiative.

The UK Press Gazette reported on the Chatham House event: you can read the report and find a link to the Legal Panel’s Sanctions Report on this link:

We campaign for free, bold and honest journalism across the Commonwealth. Our members should feel engaged, supported and safe in pursuit of these aims, as they work to uphold the finest principles of the profession and their role in a free society. Our aims and values are enshrined in The 12 Principles, a new code proposed for freedom of expression and the role of media in good governance across the Commonwealth.