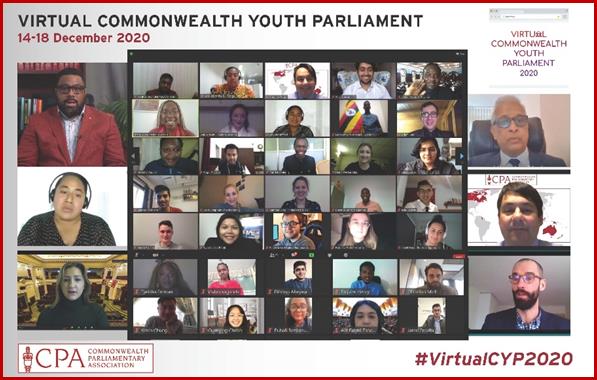 Young citizens from across the Commonwealth have participated in a week-long Virtual Commonwealth Youth Parliament, giving them the opportunity to experience parliamentary democracy, meet other young leaders and discuss urgent global issues.

Youth delegates acted as Members of Parliament for the fictional jurisdiction of ‘Commonwealthland’. They were split into two political parties, with a third group of independent Members. The central issue of the week was a mock Bill proposing a new COVID-19 Youth Relief Fund and a Statistical Bureau for Youth Unemployment. Sessions were designed to replicate real parliamentary processes and included intra-party meetings, Prime Minister’s Questions, Committee hearings, a debate on the Bill and a mock press conference.

Some of the youngest current Parliamentarians in the Commonwealth acted as Speakers for the Commonwealth Youth Parliament, ruling over the House and moderating debates. The three Speakers for the week were Lord Fakafanua, the youngest ever Speaker of the Legislative Assembly of Tonga; Senator Jordon Steele-John, the youngest current Member of the Senate of Australia; and Hon. Sharie De Castro, a Member of the House of Assembly of the British Virgin Islands and a prominent youth activist.

The CPA also partnered with leading international and Commonwealth organisations to provide expert witnesses for the Committee sessions of the Parliament. These sessions were an opportunity for the young Parliamentarians to scrutinise a Bill in detail and receive evidence from external specialists. Drew Gardiner, from the International Labour Organisation; Taofeekat Adigun, from the Commonwealth Youth Gender and Equality Network; and Dr David Strain, from the Commonwealth Medical Association, fielded questions from delegates on issues relating to social affairs, employment and health.

At the opening session of the week, Dr Arjoon Suddhoo, Commonwealth Deputy Secretary-General, and Lord Fakafanua spoke alongside CPA Secretary-General Stephen Twigg. Dr Suddhoo challenged delegates to “be bold and be different” and to “create the kind of parliament you would like to see in the future”, whilst Lord Fakafanua urged participants to “seize opportunities to represent your community.”

The CPA Secretary-General told delegates: “Young people’s voices must be heard, particularly during challenging periods such as a global pandemic. As we look to rebuild from the COVID-19 crisis, we must do so inclusively and sustainably, harnessing the power of technology and innovation. The Commonwealth Youth Parliament brings together a diverse group of young people to learn from one another and find common, cross-party solutions to global challenges.”