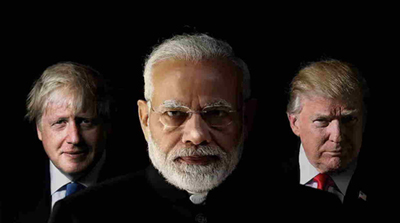 Narendra Modi: The Yogi of Populism, by Mihir Bose

If political populism was an international sport, Narendra Modi would have to be given a handicap, writes MARTIN LUMB.

Seizing on what his Hindu-nationalist Bharatiya Janata Party has decried as the corruption, inertia and nepotism of the post-colonial era, he’s fed an eager populace  with a simple message: You’ve been dispossessed.

They lapped it up, and he won two thumping election victories. No need for him to make up stories of election fraud. In a field of impressive runners, he’s way out in front in the international populism stakes.

But while his political tactics may match those of some unsavoury contemporaries on the world stage, there is evidence that his fight to the top will be far more consequential than theirs, his manipulation more skillful.

It’s this turning point in Indian politics, driven in part by a dark anti-Muslim energy, that has prompted Mihir Bose to look at how his birthplace reached such a troubling juncture.

Bose is the ideal interpreter of this transformation in the Indian political landscape, given his prolific output on everything that makes the country tick – politics, business, Bollywood and cricket.

He traces the striking similarities between the messages hammered home so crudely in recent election campaigns elsewhere, and Modi’s own constant theme.  That is, you’re losing control of your own country, your destiny is being sacrificed, and I’m showing you the true path out of this.

This may sound familiar from the recent American presidential campaign, and the EU referendum in the UK. In India’s case, it goes back decades to the seminal moment of independence and  Partition, and the ability of Hindus and Muslims to live together.

When Jawaharwal Nehru became India’s first prime minister, his guiding principle for keeping such a sprawling multi-layered society together was secularism. What Modi has done is to debunk this, and as Bose argues, what was once considered anathema, and ideas at the very fringe of Indian society, have now been brought to the fore. .

Furthermore, says Bose, he’s converted this idea of Hindu nationalism into a touchstone of identity, part of his party’s core ideology of Hindutva, which he believes all Indians whatever their faith must accept.

Examples of discriminatory measures aimed at Muslims abound in the Modi era. One of the most notorious is the Citizen Amendment Bill, supposedly meant to help illegal immigrants who’d suffered religious discrimination to achieve citizenship.  Six minority communities were specified in the bill – Hindu, Sikh, Buddhist, Jain, Parsee and Christian. One other very significant minority community is not on the list.

There is also the revoking of Article 370, written into the Constitution to recognise the special status of Kashmir, the only Muslim-majority state in the Union. This provision allowed for a state flag and a measure of autonomy, intended when the Constitution was drawn up as living proof  that India could be a secular state allowing for people of all faiths. But secularism is anathema to Modi and the and the special provision was an obvious target for the BJP.

Along with the baggage of populism comes the cult surrounding a leader, and along with the cult comes the lunatic fringe. With Trump in the US it was QAnon and the message that their opponents were really Satan-worshipping paedophiles. In neat examples of how fanaticism leads to suspension of reality, Bose finds time to talk to Hindu supremacists in India who tell him the magnificent Taj Mahal, built by the Mughal emperor Shah Jahan, was actually a Hindu palace appropriated by the Muslims, and that the high priest of secularism, Jawaharwal Nehru, was in fact a secret Muslim.

But who needs fantasists when hardline Hindu fundamentalists are already so well entrenched in the Indian body politic? This book should serve as a salutory reminder of how perceptions change and how the fringe can become the mainstream.