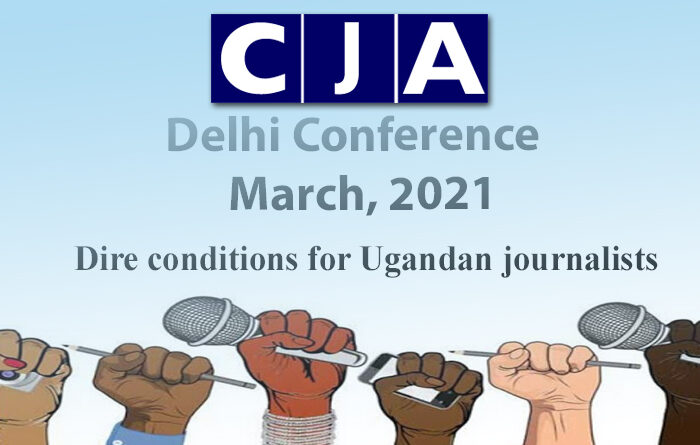 A prominent Ugandan journalist and academic has painted a grim picture of what life is like for her fellow professionals in the country now, struggling against the twin assaults of state oppression and the Covid pandemic.

Drito Alice spoke out at the CJA conference conducted online from Delhi. Ms Alice is president of the CJA in Uganda, and has worked on the Media Freedom Charter for Commonwealth countries.

She denounced what she said was the “new normal” in Uganda which had seen state-inspired brutality against journalists, and she said there were reports that journalists were treated as “shooting targets” for the police and other security forces using rubber bullets, teargas, pepper spray, intimidation, assaults, arrests and detention during the recent presidential election. Foreign journalists had been deported.

Ms Alice also said there had been a last-minute vetting process introduced for journalists wanting to cover the election. But no consideration had been given by the authorities to journalists from rural areas who cold not reach the Media Council office in Kampala in time to register, because of Covid restrictions.

She reported the Inspector General of Police as saying that he had no apology for attacks on journalists, as they were meant to stop them from going where there was danger.

“The language and actions of police and other security agents towards journalists are of military DNA not democratic, and have tarnished Uganda’s international image and reputation, a deficit that calls for redress,” said Ms Alice.

All this came on top of sweeping anti-Covid restrictions. Many media companies had been left struggling as revenue dwindled, and problems acquiring protective equipment had subjected journalists to health risk, anxiety and stress.

She said Covid had led to staff being sent on unpaid leave, suspension of publications, journalists being overworked and compromised output quality. There had also been severe wage cuts and some public institutions had scrapped their media budgets.