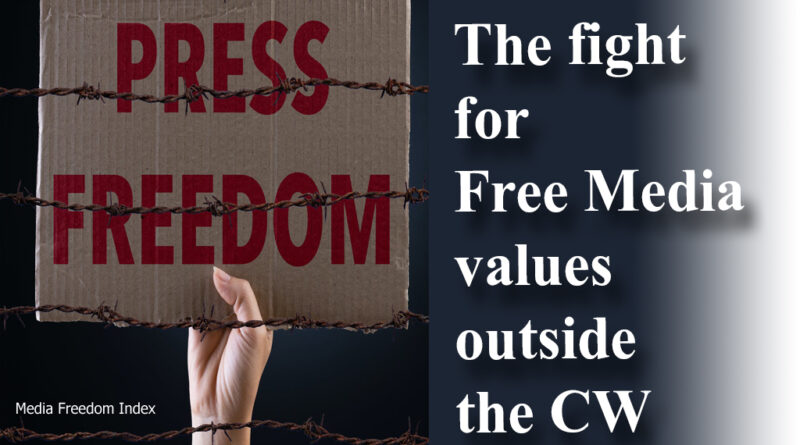 A personal account of how journalists in Myanmar struggle against attempts to silence the media, by TINA BURRETT of Sophie University, Tokyo.

Since the military coup in Myanmar on 1 February, more than 600 pro-democracy protesters have been killed and over 2500 detained, including dozens of journalists deliberately targeted by security forces. As peaceful protesters defy the military on the streets, another battle is raging online.

As one of its first acts, on 4 February the military government blocked Facebook — used by protesters to coordinate the civil disobedience movement (CDM) against the coup — and imposed curfews on internet access. After Myanmar’s previous junta officially relinquished power in 2011, Facebook became the main communication tool for a nation of new netizens suspicious of the mainstream media. Preloaded on new mobiles and initially accessible without incurring data charges, Facebook is now used by half of Myanmar’s 54 million population. Facebook has quickly become the preferred platform for political actors of all stripes seeking to influence public opinion while bypassing the professional media.

The war for social media influence was a catalyst for Myanmar’s latest coup. The army seized power after the online strategy pursued by the military-backed Union Solidarity and Development Party (USDP) failed to win votes in the November 2020 general election. Despite outspending their rivals on Facebook advertising and stoking fears of religious and ethnic-minority insurgencies without the military’s hand on the tiller, the USDP won only 33 of 476 parliamentary seats. Emboldened by victory with an increased majority, Aung San Suu Kyi and her National League for Democracy (NLD) — that won 83 percent of votes — pushed ahead with constitutional reforms to curb military power.

The USDP responded to its humiliating defeat by accusing the NLD of election fraud, despite international observers finding ‘no major irregularities.’ On its Facebook page, the USDP painted the NLD government’s COVID-19 financial assistance to low-income families as vote buying. When Myanmar’s Election Commission rejected its fraud claims, the military arrested Suu Kyi and other NLD-government leaders. To justify its actions, the military released a deepfake of one of Suu Kyi’s allies accusing her of accepting $600,000 in bribes. No one was convinced and the forgery was quickly exposed.

Failing to control messaging around the coup, Myanmar’s military have decided to kill the messengers, engaging in a variety of tactics to silence media and activist opposition. In early March, the junta revoked the publishing licenses of five major media groups — 7Day News, Myanmar Now, Mizzima, Khit Thit Media and Democratic Voice of Burma (DVB) — for supposedly anti-military coverage. Following its announcement that it would keep publishing on Facebook and YouTube, Mizzima’s offices were raided by security forces and equipment seized. Ten reporters from different news outlets were also charged under the Penal Code that outlaws statements likely to cause military personnel to disregard their duties and that carries a potential penalty of up to three years in prison. DVB broadcaster Ko Kaung Myat Naing was arrested while live streaming from his home, that the security forces pelted with stones. An additional 12 journalists were detained without charge.

The violence and intimidation meted out by the military has done little to deter opposition to the coup. Facebook and other communication platforms are still intermittently blocked but are accessible via VPNs that have seen a 4300 per cent increase in demand according to Top10VPN.com. Coordinated via Facebook, the civil disobedience movement, that urges government employees to boycott working under the junta, is stalling the machinery of state. The impact is huge, with hospitals shuttered, ministry offices empty and banks closed. In a new tactic, protesters are asking residents to throw garbage on the streets at key intersections to bring infrastructure to a standstill. Opponents of the coup are also shaming members of prominent military families on social media. Pro-democracy supporters have set up a Facebook page targeting the adult children of senior generals who live luxurious lives abroad — private jets, designer clothes — all shared on social media. This shaming campaign came in response to the arrest of celebrities criticising the coup. Using its control over state television, the junta broadcasts daily wanted lists of popular figures, such as renowned actress Paing Phyo Thu, who was forced into hiding for offering financial help to striking government employees.

Despite the military’s best efforts to reimpose the culture of fear and self-censorship characterising its earlier regime, pro-democracy activists are winning the information war. From their hideouts across the country an army of independent media and citizen journalists continue to expose the coup leaders’ cruel, inhuman acts against peaceful protesters, including children. Leaders of Myanmar’s myriad of ethnic groups are standing together to condemn the violent coup.

In the past decade, Myanmar’s brave citizens have tasted free speech. Many of them are now willing to die defending that freedom.

‘This article was first published by the Centre for Freedom of the Media, University of Sheffield http://www.cfom.org.uk/2021/04/16/anti-coup-journalists-winning-myanmars-information-war-at-great-cost/