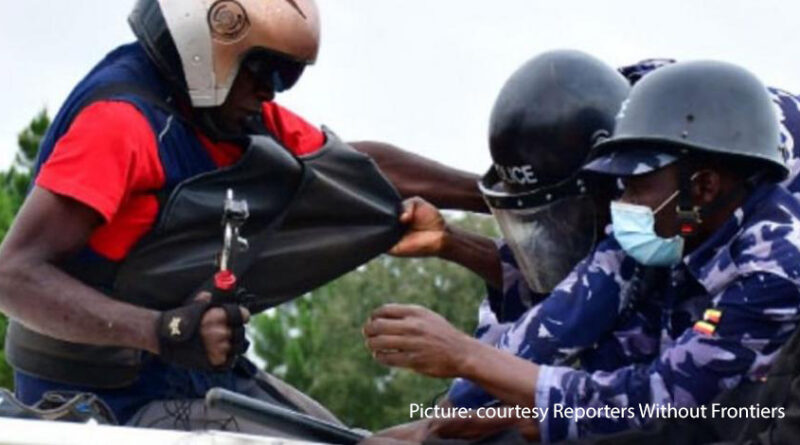 Above, a radio reporter is challenged by police in Uganda during demonstrations in December in the Presidential election campaign.

The Federation of African Journalists has condemned what it says are continuing attacks on journalists and media freedom in Uganda by the security forces.

It says several journalists suffered serious injuries and psychological trauma on February 17, when military police assaulted them as they covered the presenting of a petition against deteriorating human rights in the country, to the United Nations Human Rights Office in Kampala, by the National Unity Platform leader, Robert Kyagulanyi Sentamu, also know as Bobi Wine.

Broadcast journalists John Cliff Wamala, Josephine Namakumbi, Joseph Sabiti and their print colleagues Irene Abalo and Timothy Murungi among others, were left bleeding and with sprained limbs after they were chased and beaten.

The Federation notes the deteriorating environment for safety of journalists in Uganda and calls on President Museveni as Commander in Chief to be accountable and restrain his troops from unprovoked attacks against journalists and other citizens.

“We note with concern that attacks against journalists which started during the campaigns for presidential elections continue to date and appear to have become an operational norm for Ugandan security personnel. The public has a right to know, and this is only possible when journalists can operate in an environment that is secure and free of threats from any quarters. We wish to remind Ugandan authorities that they have a duty to protect journalists and other citizens from the arbitrary actions of the uniformed services,”  said FAJ President Sadiq Ibrahim Ahmed.

The Federation states that journalists were clearly identifiable and the attack reflects a dangerous trend against the media, and that it wants to remind the Ugandan government that journalism is not a crime.

The FAJ also censures what it says are continued human rights violations, including abductions, killings and detention in ungazetted places, of people perceived to be opposition supporters.

It calls on the African Union and the wider international community to stand by journalists and the people of Uganda, to take action against a growing impunity and disregard for the rule of law by the Ugandan state.

The Uganda Journalist Union President, Lucy Anyango Ekadu, said there was no way journalists would continue working under such conditions when they were beaten and their equipment damaged. She also called on all journalists affected in this way to open cases against perpetrators of crimes against the media.

“We are calling on partner organisations and journalists to consider imposing a complete blackout on all government events if their safety is not guaranteed,”  she said.