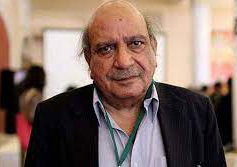 A tribute by SYED BADRUL AHSAN

A bold voice in Pakistani journalism and human rights activism, I. A. Rehman, has died in Lahore. He was uncompromising in his belief that democracy and rule of law were fundamental to the functioning of a state in contemporary times and that in defence of people’s rights it was necessary for journalists to keep undemocratic regimes on their toes. Rehman will long be remembered for his services to his country as also to the people of South Asia who, he believed, needed to live in peace and amity with one another.

The death of a brave journalist is much more than a matter of mortality asserting itself. It is a question of a particularly enlightening phase, in all-enveloping darkness, drawing to an end. When Tofazzal Hossain Manik Mia died in Rawalpindi of a cardiac arrest in 1969, it was the end of an era in journalism as it used to be in pre-1971 Pakistan.  Manik Mia was perspicacious enough to realize that if journalism stayed silent or kowtowed before the powers that be, it would be as good as dead. His boldness in identifying with the demands for Bengali autonomy, specifically through his support for Bangabandhu’s Six Points, were of critical importance in the mid to late 1960s.

Manik Mia went to prison for the combination of the roles in him of a journalist and public intellectual. That the Ayub regime considered him a threat was clearly underlined by the regime’s placing him in incarceration. Once a journalist goes to prison for his political convictions — and this is a lesson which has come down to us in modern times — half the battle for a reassertion of the rights of a society is won. Manik Mia and that brave Indian journalist Kuldip Nayar epitomized not just journalism as it should be but beliefs that resonate with people at risk from states unbridled in their intolerance.

Kuldip Nayar was one of those clear-sighted journalists who were not ready or willing to take the Emergency imposed by Prime Minister Indira Gandhi in India in 1975 lying down. At a time when many media people in India remained subdued, were afraid to protest the assault on democracy, Nayar chose to let such callow young men as Sanjay Gandhi know that repressive measures by the state were a rebellion against the sovereignty of the people. He went to prison, remained unrepentant and then had the pleasure of seeing the electorate punish Indira Gandhi and the hubristic men around her. Nayar would later serve as his country’s high commissioner to Britain before returning to journalism.

Media people of his era were avid students of history conscious of the building blocks needed to construct the edifice of democracy.

Back in the early 1960s, as Field Marshal Mohammad Ayub Khan prepared to impose a constitution on Pakistan, a document that was a patent negation of democracy — for its main pillar was Basic Democracy, which was neither basic nor democratic — the Bengali journalist Zahur Hossain Chowdhury argued with him on the need for proper democracy to be restored. The dictator was on a visit to Dhaka. Martial law was yet in force. But that did not prevent Chowdhury from carrying himself like the committed journalist he was. Within that atmosphere of fear clamped by the military, Chowdhury spoke his mind. That was an incredible demonstration of professionalism.

Journalism in India has regularly been a tale of unmitigated boldness. There are the many instances of Nikhil Chakravartty publicly arguing against the Emergency and holding forth on any attempts on the part of the political establishment to undermine democracy. Politically leftwing, Chakravartty did not let his ideology cloud his belief in the power of journalism to do good. He was a tall man in journalism and his commentaries on the issues of the day came through in his columns as also in Mainstream, the journal he founded and edited till his death. B.G. Verghese, the intrepid editor of the Hindustan Times, felt distinctly uncomfortable with the Emergency and did not hold back from his criticism of the measure. He paid a price. He lost his job. But that did not deter him from expressing his opinions. In that very year, 1975, he was the recipient of the Magsaysay award.

And then there is the courage of S.Nihal Singh we recall in India. He spoke truth to power and was unrepentant about his irreverence. In Pakistan, the sufferings of journalists such as Faiz Ahmed Faiz, otherwise a distinguished Urdu poet, are the stuff of legend. Faiz went to prison in the early 1950s for his alleged role in a conspiracy to overthrow the government. In later times, Mazhar Ali Khan, unwilling to genuflect before the regime of General Ziaul Haq, found himself in prison in 1981. And then there are the travails Salamat Ali went through when he was imprisoned by the Ayub and Zia regimes. Ziaul Haq’s perversity reached a new low when the military ordered lashes, literally, to be administered on Salamat Ali for his refusal to keep the dictatorship in good humour.

Journalism in Bangladesh has had its moments of light, as evidenced through the writings of Santosh Gupta and Waheedul Haque. Neither man would agree to remain silent when it was a question of defending fundamental Bengali aspirations in the face of onslaughts by an autocratic regime or by medievalism threatening to take the country down and into the darkness they represented. Jehangir Hossain’s refusal to stay silent when dictatorship goes overboard is a story we have never forgotten. At the height of General Hussein Muhammad Ershad’s illegimate hold on power, he asked the military ruler whether there had been a directive from the regime that his poetry should grace the front pages of newspapers. The question certainly did not please Ershad, but that was the courageous journalist in Jehangir Hossain.

I.A. Rehman’s death leaves the world of South Asian journalism poorer. Media people of his era were avid students of history conscious of the building blocks needed to construct the edifice of democracy. In India, Pakistan and Bangladesh, this band of brothers has never held itself back from confronting arrogance in the form of unbridled and unabashed power, eyeball to eyeball. It is that old courage which in essence is the history of these three nations. It is a legacy we in our times can ignore at peril to our future.