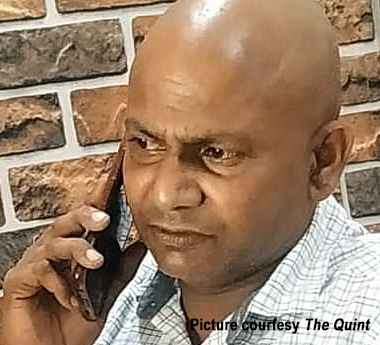 The Editors Guild of India has expressed shock over what it says is the cavalier manner in which Uttar Pradesh Police is treating the mysterious death of TV journalist, Sulabh Srivastava, pictured, in Pratapgrah. Mr Srivastava, who had been threatened by the a criminal gang for exposing their wrongdoings, had recently written a letter to the police expressing grave apprehensions for his life, and saying he believed that people were following him.

“The authorities paid no heed to his fears. Srivastava died a couple of days after he wrote the letter to the police. The police are passing off his death as being caused by an accident, claiming that his bike rammed into a handpump,” the Guild said in a statement.

“His death comes at a time when the media is facing increasing pressures from central and state governments who insist that they follow the official narrative regarding the administration’s handling of the pandemic. What is further worrying is that the police and the local authorities liberally and unjustifiably use laws such as sedition to file charges and arrest journalists. This is against the spirit of the judgment given by the Supreme Court in the Kedar Nath Singh case and re-iterated in the recent sedition case against Vinod Dua.

“Journalists and cartoonists critical of the government are also being targeted on social media, as pressures are being mounted by the government on these platforms to remove such critical journalists on the specious grounds that they are violating the law of the land. All of this is contrary to the commitments that Prime Minister Narendra Modi made at the G-7 summit to democracy, openness and against authoritarianism.”

In a previous statement, the Editors Guild welcomed the Supreme Court judgment on the sedition case against senior journalist Vinod Dua

A statement from the Guild said the court not just quashed the criminal complaint against Dua, but also underlined the importance of protecting journalists from sedition cases.

“While the reference to the earlier judgement of Justice Kedar Nath Singh and the need to protect journalists from sedition charges is welcome, the manner in which such laws are implemented by law enforcement authorities in different parts of the country, leading to pre-trial incarceration, needs further intervention by the apex court,” the statement said.

“EGI expresses satisfaction with the Supreme Court’s concerns over the chilling effect that sedition laws have on free media and on our democracy. The Guild demands repeal of these draconian and antiquated laws that find no space in any modern liberal democracy.”