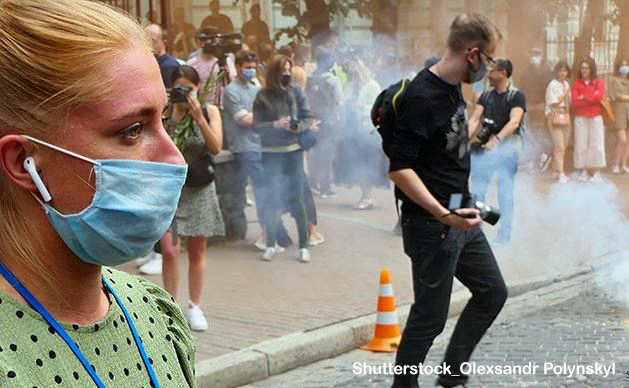 A new UNESCO report has highlighted the trends and challenges regarding the safety of foreign correspondents, as well as the crucial role they play in informing the public around the globe.

Like many of their fellow journalists, foreign correspondents are affected by growing hostility and violence towards the press, including gender-based violence and harassment against women journalists as well as killings. They also face specific threats and a particular brand of political hostility, as they are at times branded as foreign agents who spread disinformation or as threats to national security. In some countries, they are blocked from obtaining accreditation or visas, and may even be expelled to deter scrutiny and reporting on elections, public protests along with political and social issues. These kinds of measures have been particularly visible during the COVID-19 crisis.

“Foreign correspondents, through their cross-border investigations and reporting, ensure that a diversity of voices and issues are reflected in the news. Through this, they contribute to the plurality of the media, as enshrined in the 1991 Windhoek Declaration and in the Windhoek+30 Declaration, adopted earlier this year on the occasion of its 30th anniversary. I call on all relevant stakeholders to renew their commitment to the safety of foreign correspondents and of all media workers,” said Mr Jelassi.

Reflecting on these issues, William Horsley, International Director of the University of Sheffield’s Centre for Freedom of the Media, co-author of the report, and CJA Exco member, stated:

“Threats faced by journalists who report across international borders represent an existential challenge to people’s right to live in free and democratic societies. State authorities, lawmakers and civil society actors everywhere must ensure that breaches of international rules protecting the safety and work of journalists have real-life consequences. This is one of the most urgent tasks of our time.”

The report likewise underlines foreign correspondents’ contribution to transnational investigations about crime, corruption and injustice through cross-border collaborations, such as the 2016 Panama Papers. This contribution was emphasized by Meera Selva, Deputy Director of the Reuters Institute for the Study of Journalism at the University of Oxford and co-author of the report.

“Much of the most impactful journalism in recent years has crossed borders. Journalists have exposed international surveillance operations, drug cartels with a global reach and cross border corruption, and since organized crime and corruption networks operate with little regard for national borders, journalists pursuing a story in one jurisdiction may face deadly threats from beyond its borders,” she said.

The report also includes sets of recommendations for concerned stakeholders such as news consumers and civil society, media organizations and journalists, along with States. They notably include: the provision of emergency visas for journalists at serious risk, prioritizing the implementation of international norms and standards, reviewing and revising national laws when necessary, removing restrictions on reporting and research seen as critical of governments, and collaborating with UN bodies and civil society to develop independent monitoring.

The CJA’s own campaign for media freedom and safety of journalists, set out in the Commonwealth Principles on Media and Good Governance, is still being considered by the relevant Commonwealth bodies. See Media Freedom Edging Closer https://tinyurl.com/ph8hh5nx

William Horsley, co-author of the UNESCO report and co chair of the working group which produced the Commonwealth Principles commented: “The text of the Principles which the six Commonwealth Organisations jointly launched in 2018 as a civil society initiative has become a catalyst for the Commonwealth to focus in new ways  on the issues of journalists’ safety, media freedom, and the integral link between those things and the rule of law and the maintenance of open, democratic societies.  The CJA strongly believes it is vitally important that the Commonwealth lives up in practice to the commitments it has made as an international organisation to fostering and maintaining “an independent media protected by law in its freedom to report and comment on public affairs.”