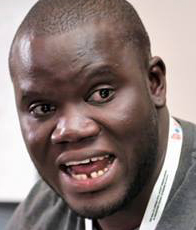 President Adama Barrow of Gambia has signed the Access To Information Bill into law. The new measures are intended to facilitate the work of journalists and empower civil society to access government-held information to enhance accountability and transparency.

Various stakeholders and civil society organisations including the Gambia Press Union had worked together to establish the Civil Society Coalition, which lobbied throughout the country for implementation of the bill.

The President of the Press Union, Sheriff Bojang Jr, pictured, said “The signing of the ATI Bill into Law is a landmark achievement not just for civil society or the media but for every Gambian citizen and will go a long way in fostering the culture of transparency and accountability in the public service.”

The International Federation of Journalists welcomed the passage of the bill.

“Access to Information is a fundamental human right that is guaranteed in most constitutions and international instruments such as the International Covenant on Civil and Political Rights. We welcome the signature of this bill which will hold the government accountable and ensure there is a high level of transparency in gambian governance,” said the IFJ General Secretary, Anthony Bellanger.

“The Gambia Government must put in place effective mechanisms for the mandatory disclosure of information and public information officials who wilfully deny citizens their right to government held information must be sanctioned. Journalists, activists and members of civil society should also endeavour to make good use of the Law as it has every potential to help improve their work.”

The Declaration of Principles on Freedom of Expression and Access to Information in Africa, which was adopted by the African Commission on Human and Peoples Rights in November 2019 also guarantees this fundamental right.