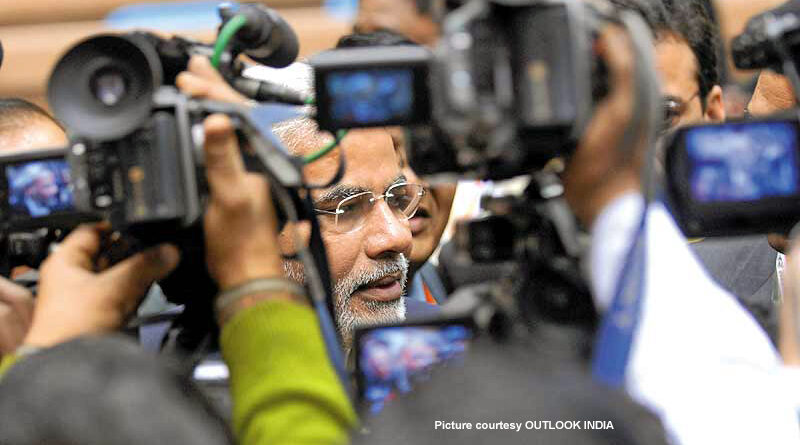 BHARAT BHUSHAN looks at how much of the Indian media gives the prime minister an easy ride.

Hours after being welcomed by troupes of dancers on his return from the US, the Indian Prime Minister Narendra Modi, pictured, made an unexpected visit, well-past sundown, to the ongoing Central Vista project. The next day, the media was filled with his pictures in a construction supervisor’s white hard-hat. Published, without comment or criticism, they underline the sad truth of Biden’s observation that the Indian media is “better behaved” than its American counterpart.

The melange of images show a prime minister in command: talking to workers; examining an architectural drawing here and pointing an index finger there; climbing down a scaffolding and peering into the darkness of the night from a precarious perch. Earlier Prime Minister Modi had tweeted a photo from his outbound flight to the US with the caption: “A long flight also means opportunities to go through papers and some file work.” These far from candid photos are Prime Minister Modi’s way of communicating with the media without having to take uncomfortable questions from journalists.
One of the achievements of Prime Minister Modi in the US seems to have been to convey to US President Joe Biden his reluctance to take questions from the media following their bilateral meeting at the Oval Office. President Biden told the media present, “The Indian Press is much better behaved than the American press…And I think, with your permission, we should not answer questions because they won’t ask any questions on point.” The US media could have sprung a surprise on the Indian prime minister only used to stage-managed interactions.

While the Indian media has by and large reacted nonchalantly to President Biden’s remark, the US media erupted with anger at being compared to India which ranks 142nd in the World Press Freedom Index. The US is at 44th place. White House Press Secretary, Jen Psaki, had a tough time calming an irate US media. She was at pains to point out that the US President had held more than 140 media interactions since he took charge on 20 January this year–averaging 16 a month. That means Biden has held more interactions in eight months than the eight years that Prime Minister Modi has been in office. His score is zero.

How then does Prime Minister Modi still get good press? Photographs and videos in the media are the key.

The early part of his first term was covered by official photographs and selfies with world leaders, often in an embrace. His interaction over tea with US President Barak Obama, was reported as a silent video that gave no clue of what was discussed between them. Nevertheless the visuals conveyed a comfortable friendship, with a chuffed Prime Minister later boasting about being on first name terms with “Barak” and chuckling over their “tu-tadak” (informal) relationship.

Subsequently, rallies in the US staged by his Indian-origin supporters in America, saw him move into a celebrity mode, mouthing pop inanities like “May the Force be with you” at Central Park in New York or “Abki baar Trump sarkar” in Houston. The Indian media had its “fan-boy” moment playing up the photographs and videos of these events, without ever wondering if the style was appropriate for a prime minister.

Domestic coverage also adopted the same style; e.g. broadcasting videos of Prime Minister Modi doing yoga in his garden. The controversial interview with Man vs. Wild anchor Bear Grylls was another over-the-top attempt showcasing a fearless man ready to take on the unforeseen. Yet when the unpredictable struck with the Covid-19 pandemic, governance collapsed overnight.

The harsh lockdown showed a government in panic mode and clearly unable to anticipate how grievously its policies would impact millions of migrant workers in Indian cities. Was he really able to rally a frightened nation and build resilience by asking them to ring bells and light lamps? The jury is still out on that.

What the people did get during the pandemic though were videos of the Prime Minister feeding peacocks. Another set of pictures from a Gujarat zoo, showed parrots being coaxed to sit on his arm. Nobody thought to mention that such photo-ops are de rigueur for ordinary tourists at zoos. Their effect in the public domain was to flesh out the flattering image of a leader in whose paternal shadow even animals found comfort. However, glitches in governance during the pandemic took off some of the shine. The regime’s majoritarian agenda also began to unfold through controversial legislation. Prime Minister Modi’s first opportunity to rebuild his image on an international stage came with his recent trip to the US – where he was not only a head of state visiting the UN General Assembly but also an invitee to a bilateral state visit and the QUAD summit.

Unfortunately, the diplomatic gains fell short of expectations. The QUAD summit lost its sheen after the US, UK and Australia launched AUKUS, a parallel trilateral security arrangement excluding QUAD members India and Japan. The meeting with US Vice President Kamala Harris, also did not go well. Harris indicated that he had fallen short of US expectations on the domestic front by telling him, “It is imperative that we defend democratic principles and institutions within our respective countries”.

Photos of the interaction published in the Indian media, however, managed to cover up this diplomatic put down. Rather pictures of Prime Minister Modi with index finger stabbing the air suggested that it was he who was controlling the conversation with Harris. Perhaps it is because photos allow him to guide the narrative that he prefers this form of communication with the public.

It is possible that his experiences with the media as Gujarat chief minister after the 2002 riots left him with a fear of unstructured interactions. He may have never gotten over the unfinished interview with Karan Thapar which he got up and left mid-way. The Indian media has since learned not to embarrass him and to cooperate with his distinctive style of controlled communication. It is not just ‘better behaved’, it is obedient.

This article first appeared in the Business Standard