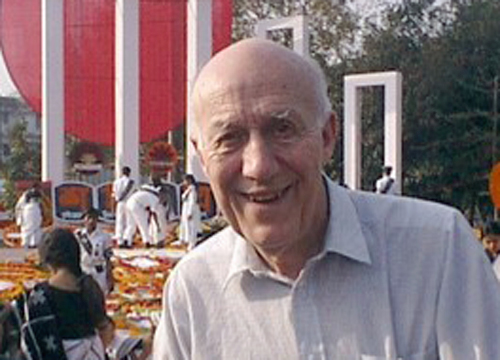 A CJA stalwart from the organisation’s earliest days, David Spark, has died in London. He was 89. This appreciation is from CJA President Chris Cobb:

In his autobiography My Paper Chase the legendary British newspaper editor Harold Evans recalls an encounter with a young writer in the newsroom of the Northern Echo, a daily in the North East of England.

It was a short-staffed Sunday night at the Northern Echo. There had been a race riot in nearby Middlesborough and Evans, in a deadline crunch, needed someone to compose an editorial commentary.

Evans, who later gained fame as editor of the Times and Sunday Times, wrote:

‘I was too busy to write the editorial myself and the only writer around was a young man so shy he had difficulty getting to the end of a sentence. I had only just met David Spark and had no idea that his prematurely bald head contained a keen analytical intelligence, a rapid-fire writing ability when required and a profound knowledge of everything about the North East. . . Spark would deliver the editorial in double quick time.’

It isn’t the only reference to David Spark in Evans’ book but together, the anecdotes portray a journalist whose opinions and talents Evans deeply respected and a person he came to rely on – especially to get the Echo out of numerous, often humorous journalistic dilemmas.

David was an early active member of the CJA and for years, the editor of our monthly newsletter.

Many of those in the CJA family who have shared memories of David since learning of his death have known him since the early days of the CJA in the 1970s. Others came to know him later.

As a relative newcomer to the association, I roomed with David at a CJA conference in Trinidad shortly after the Evans book was published in 2010. We spoke briefly about it but David didn’t seem overly impressed at the recognition – shrugging and laughing it off in that shy, modest manner that was his personal hallmark.

As Evans suggests, David Spark had an authority derived not from position but from an innate calm and wisdom, and an unerring ethical compass.

Members of the CJA family have been sharing their David Spark stories since learning of his death. There is no better way to illustrate the man – and the journalist – that David was.

London colleague Richard Bourne, former deputy editor of the now defunct New Society and a veteran CJA member, first got to know David in 1972. By then, David had transferred south from the North East and had been working at the Oxford Mail.

“I remember him from that time as a wonderfully humane and liberal person,’ wrote Richard. ‘And of course he threw himself into writing the (CJA) newsletter with enormous thoroughness and diligence.”

In his tribute, CJA member William Crawley tells us of David’s contribution to the creation and pursuit of ‘development journalism.’ In the early 1970s, he was one of several journalists – including Harold Evans – who set up the Development Journalists Association.

Wrote William: ‘The concept of Development Journalism was relatively new and only sporadically recognised in the big media institutions. David was an active and energetic advocate of the concept. The DJA eventually folded but David Spark continued his advocacy in other forums including the CJA.

‘It’s fair to say,’ he adds, ‘that the idea of Development Journalism was either absorbed into mainstream economic and social journalism, or became more specific to particular areas of commercial activity. But David Spark made an important contribution to awareness of the challenges and pitfalls of development, articulate but never aggressive. We owe him a debt.’

And this from Rajasinghe Bandara:

‘I met David Spark for the first time in a London Hotel in 1999 at a CJA party where I could meet several committee members of the CJA.  David was the Editor of the CJA newsletter, and he was interested about my story.

‘I came to the UK as an asylum seeker after my whole family was victimised by the state terrorism because of our dedication and commitment to the ethnic harmony. My younger brother Nalaka was killed by the LTTE terrorists.  In Sri Lanka I was a school principal and a freelance journalist.

‘David wanted to meet to hear my story. David published it in the CJA newsletter. At the Immigration tribunal it was great evidence.  I was granted refugee status with Indefinite leave to remain in the UK.  Since the time we met he had been a good friend of mine.’

Ehsan Ahmed Sehar, President of the Rural Media Network in Pakistan, reminded CJA members this week that David was also an author in his own right. His book Investigative Reporting: A Study in Technique is a gold mine of insightful tips.

Ehsan recalls how David sent him a copy of his book as a gift, and from December 2003 until December 2020 unfailingly sent him an annual Christmas card.

Many other tributes to David have been circulating among the CJA family. The stories and anecdotes differ but if a few words can speak for us all, perhaps Ehsan captures most succinctly the David we knew:

“He was a noble soul and gentleman.”