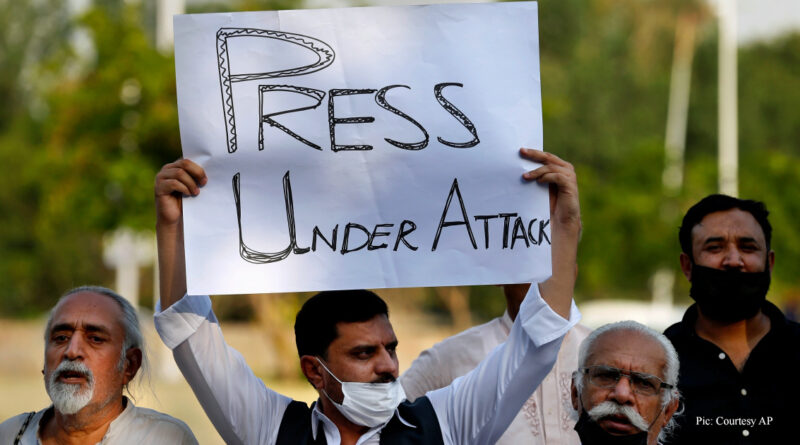 The last three decades have increased freedom for the print media and a liberalisation of the broadcasting sector in Pakistan, while social media has changed the media scenario in the country.

The transformation towards a freer political and media environment began in 1988 with the relaxation of procedures for starting new publications, which resulted in the mushrooming of a large number of newspapers and magazines. Today there are 1,672 publications in the country, 114 television channels of which 31 are news and current affairs channels. Independent TV channels now broadcast popular news and current affairs programmes that are often critical of government policies and personalities.

Moreover, there are 258 FM radio stations, 65 million WhatsApp users, 56 million YouTube users 37 million Facebook users, 20 million Tiktok users and 20 million Twitter account holders. Internet use has increased at an astounding rate. Pakistan has 118 million users, making it the 8th-largest population of internet users in the world. Information and communications technology is one of the fastest growing industries in the country. Lack of software in local languages has restricted the usefulness of Internet for the vast majority of the people. However, the print and electronic media are free and pluralistic. Television channels, newspapers and magazines provide Pakistanis with a wide range of political, economic, social news and views and criticise government and political leaders – even though some pay the price for exercise of this freedom with disturbing regularity in the forms of threats, violence and economic pressure.

Digital media expansion is rapidly changing the media landscape in Pakistan so the Pakistani government has chalked out a plan to check fake news, sectarian news, and hate material. Government claims that in the larger interest of the public, digital media will be regulated to control abusive, harmful and hateful content and for this purpose, the Pakistan Media Development Authority is being set up.

However, as the technology races ahead, Journalists – and rural journalists in particular – face unchecked abuses of power by local authorities, feudal lords, religious extremists, drug mafia, ethnic and political groups, who have the means and will to deliver brutal private punishment. Freedom of expression in Pakistan is shrinking and needs to be protected, promoted and nurtured. An important constraint to freedom of expression is the culture of secrecy in government and bureaucracy, which control much of the information in the country.

According to the RMNP monitoring, Pakistan is still one of the most dangerous countries for practicing journalism and since 2000, most journalists killed in the line of duty were residents of rural areas and small towns. From January 2021 to 31st October, seven journalists have been killed in Pakistan out of which six belong to rural areas and small towns, and one journalist from Quetta, the capital of Balochistan province, was killed.

Urban-based journalists are paid and have support from their respective media organisations and official publicity departments. They are being given maximum facilities by media owners. There is no comprehensive system to act when a rural journalist is attacked, kidnapped or tortured. No one is aware of any hotline for assistance, rural journalists have no contact with the journalist bodies active in big cities. Historically the development of media in Pakistan has taken place in metropolitan centres. This is not unique to Pakistan, however what is perhaps different in the Pakistani context is that the development has not filtered down to rural areas. As a result, rural journalists remain neglected, often working in isolation with extremely limited support from media organisations in financial, moral and professional terms. Journalists themselves need to work together to bridge this gap and fight for their rights and the rights of their colleagues. Presenting a united front to the authorities, as opposed to a divided and disparate group of journalists from different locations, is essential to combating the many problems facing rural journalists.

Self-censorship in Pakistan used to be straightforward. Certain topics were simply off limits. These included articles critical of the military or government, investigative reports, and any reporting about religious organisations. Journalists in rural areas face the same constraints as their colleagues in the city, but also face serious additional issues because of their location and the social differences in those areas. For journalists in rural areas, corruption, sectarianism, honour killings, gang rape and feudal powers all represent subject matter that can cause serious issues.

Looking to the future.

Ranked by Reporters Without Borders as 145 out of 180 countries in the World Press Freedom Index, Pakistan continues to fail to guarantee press freedom for its people. Without doubt, more needs to be done to address the serious problems that journalists face on a daily basis as they attempt to bring information about what is happening in rural areas to the wider world.

RMNP has made a number of suggestions on how to improve the current situation for journalists, arguing that media houses should provide safety equipment to all correspondents, irrespective of their location, and that reporters, cameramen and other support staff covering dangerous assignments must be given insurance cover. RMNP has demanded that the widows of journalists killed because of their work should be paid compensation, while assistance for any serious medical injuries incurred in the field should also be provided. Media houses also have a responsibility to cover instances of journalists being kidnapped, and should ensure that attention remains on these cases until their release is secured. RMNP has proposed that more attention should be paid to specific rural areas where journalists face increased danger, noting that civil society organisations such as RMNP can help identify these hotspots of violence.

RMNP has also emphasised the pressing need to improve capacity-building measures for journalists in the field, noting that professionalism and safety training are essential to developing media freedom in Pakistan. Less-than-professional coverage of every incident of terrorism, accident, flood, election and other events has exacerbated the tension around these incidents. Many parts of society are now calling for codes of ethics to be implemented in media houses. This has also been highlighted by journalists, who have in recent years called for a comprehensive overhaul of the way the media operate in Pakistan, to avoid any accusations of corruption.

RMNP suggests that the other factors essential to protecting journalism as a profession in Pakistan include pluralism, an open market and the airing of different points of view, as opposed to partisanship. But for any measures introduced to make any difference to rural journalists in Pakistan, it is essential that the journalists themselves, or those with experience of how their work is carried out, are involved in formulating future plans to protect their fraternity.