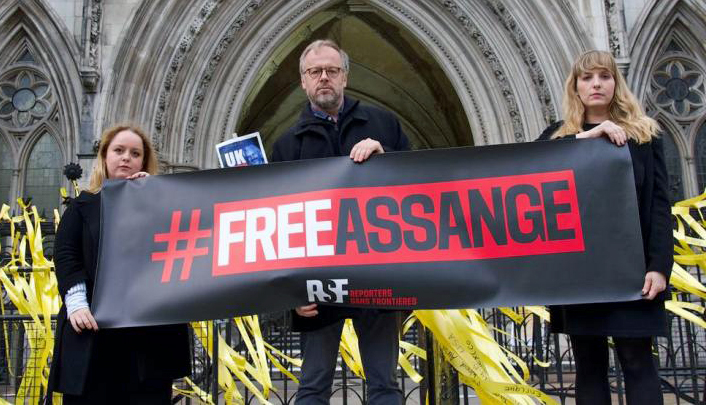 Picture shows supporters of Julian Assange outside the High Court in London.

The journalists’ campaigning organisation Reporters Without Borders has launched a petition to block the potential extradition of Julian Assange to the United States. See here to add your support: https://mailchi.mp/rsf.org/assange-petition?e=86f319fda7

On 10 December the UK High Court ruled that the United States can extradite Wikileaks founder Julian Assange. It reversed a lower court decision made in January and followed an appeal by the US in which it promised to fulfil certain conditions to reduce the risk of suicide. The lower court had ruled against extradition because of concerns about Assange’s mental health.

In the United States, Assange would face trial on 17 charges under the Espionage Act, and one under the Computer Fraud and Abuse Act, which together could see him imprisoned for up to about 175 years.

On 22 December, William Horsley, CJA executive committee member, press freedom advocate and member of the advisory board of Reporters Without Borders (RSF) in London, condemned the High Court’s decision as a great injustice.

William said:  “The prospect of Julian Assange being extradited to the US and condemned to fester in jail, possibly for the rest of his life, should appal everyone who believes in free speech and accountable government. Whatever anyone may think of Assange as an individual, the key fact is that his disclosure of the Afghan and Iraq War Logs exposed to public view war crimes which otherwise might have been covered up for ever. If the American justice system is successful in punishing him like a terrorist for revealing embarrassing truths, it will be an act of injustice by an over-mighty government and act as a severe deterrent to others. Governments around the world will be encouraged to persecute their critics, the public will be robbed of the right to know, and the work of journalists will become even more dangerous than it already is.”