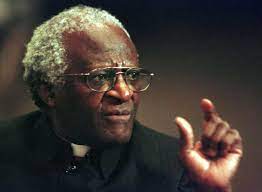 Archbishop Desmond Tutu’s death at the age of ninety takes away from our mortal world one more of the individuals who have shaped modern South Africa. And modern in this context refers to the country as it emerged following the end of apartheid in the 1990s. On a larger scale, the world is a better planet today because of the moral voices which have defined South African politics over the decades.

Tutu was the quintessential optimist, combining in his role of archbishop and activist in defence of human rights a necessary articulation of collective aspirations. His fashioning of the term ‘Rainbow Nation’ was a beautifully poetic turn of phrase. But more than that, it was an apt description of what he and so many others like him envisaged once white minority rule, underpinned as it was by racial discrimination, went the way of history and in its place emerged a new South Africa. Tutu’s foray into politics, without his being a politician in the way it is meant to be, came rather late in the day. But once he was there, there was a no-holds-barred approach which came into his adoption of a position on the question of apartheid. He dispensed with fear, but then fear had never been part of his lexicon. Men like P.W. Botha could not intimidate him into silence.

Desmond Tutu, known as much for his socio-political convictions as for his very human — and humane — qualities, saw his life draw to an end in the very month of December which felled Nelson Mandela. The father of modern South Africa — and that was Mandela — died in December 2013, having left behind a country that could truly claim to be a reassertion of the ability of a nation to serve as a moral compass for other, suffering, people around the world. That both Tutu and Mandela were a team leading South Africa out of its pariah status as a country was attributable to the vision they both demonstrated in their ideas of life as shaped by politics.

Mandela, the young radical who went to prison in the early 1960s, would emerge as a prophet of reconciliation twenty seven years later to inform the world that a new South Africa would not be built on recrimination, on bloodletting, on the macabre thought that those who had kept it subdued for generations would pay a price for their transgressions. It would be a land reconstructed and redefined on the principle of co-existence, on the moral thought of all men and women being equal in the eyes of the law. The rule of law would be paramount.

In his years as President of South Africa, Mandela convinced people around the globe of the deft touch he was bringing into politics. Tutu’s Rainbow Nation became his Rainbow Nation as he went around mapping a new road for the future for his people. Mandela could have opted for a path of bitter recrimination, involving the process of hate engendered by deprivation, toward those who had after 1948 kept black South Africans in a state of political penury through horrific racial discrimination.

He did not do that, for it was not his goal to create a new country on the foundations of bad politics. Of the men he turned to in his quest for a new South Africa, Desmond Tutu was top of the list. At the Truth and Reconciliation Commission, with Tutu presiding, many were the tears shed by those who had suffered and whose families had suffered. And many were the men in whose eyes and voices were contrition writ large. Mandela and Tutu were not prepared to have South Africa go the way of Zimbabwe, where whites lived in daily fear of their farms and homes being overrun by vindictive politics.

A lighthouse for oppressed societies

And that has been the beauty of South Africa since the day Nelson Mandela walked out of prison in February 1990. And yet one need not forget that in the build-up to an apartheid-free South Africa, there was the white lawmaker and anti-apartheid activist Helen Suzman. A thorn in the flesh for her fellow white politicians in pre-1990s South Africa, Suzman consistently drew attention to the evil that was apartheid.

Fearless and not worried about the hate she provoked in whites by her stance, Suzman used every opportunity to berate the white rulers of the country, indeed to shame them with condemnation of the shame they had subjected all South Africans to. Hers was a powerful articulation of morality and Mandela and Tutu were grateful for it. The charm of South Africa, with Mandela, Tutu and Suzman fashioning its moral landscape, is today the reality which once more is an inspiration for people everywhere.

“The arc of the moral universe is long,” said Martin Luther King Jr, “but it bends toward justice.” It is this moral universe Nelson Mandela and Desmond Tutu built in the years of their struggle. It was this bending toward justice Helen Suzman argued for in the dark days of apartheid. Of course, perfection is not South Africa’s in these turbulent times. It is refreshing to know, though, that in Thabo Mbeki and Cyril Ramaphosa, the world Tutu and Mandela built has remained a lighthouse for oppressed societies and nations everywhere.