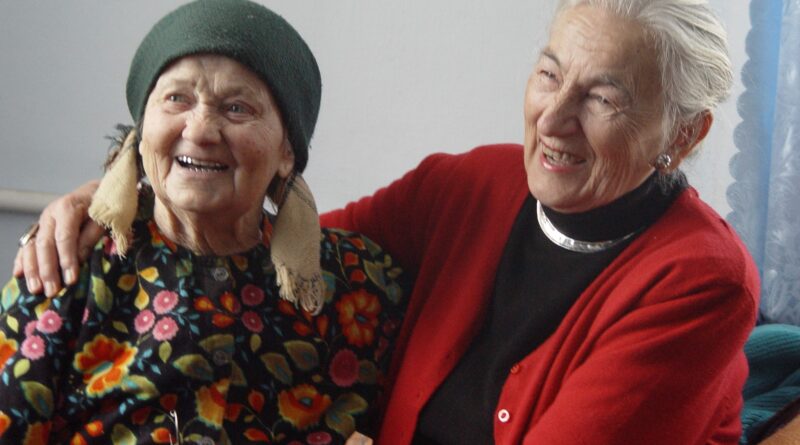 My mother, Marie-Joséphine, knows what it is like to flee a Russian invasion of Ukraine. Nearly 82 years ago, aged 15, she escaped from the far south-western town of Kolomyia into Romania with her mother and twin sister. Her father had been imprisoned by the Russians in Lviv: she never saw him again.

But my mother, now 97, is not Ukrainian. She is Polish by birth. When she fled her home in 1940, what is now western Ukraine was part of Poland, a nation which having regained its nationhood in 1918 after more than a century, was under occupation by Nazi Germany and Soviet Russia.

If my mother’s history appeared complicated – far more so than that of my English father – it was only when I accompanied her to the village near Kolomyia where she had been born that I discovered how many further layers of complexity there were. That was epitomised by an encounter with a 90-year-old woman – left in the picture above, with my mother – who had looked after the twins when she herself was barely a teenager and my mother and her sister were toddlers, only ten years younger.

The twins and my grandmother had embarked on a refugee Odyssey that took them to the southernmost tip of Africa before ending back in the northern hemisphere. My mother now finds herself widowed in the land of her husband’s birth. But her Ukrainian nursemaid, without ever leaving the village, had been a citizen successively of the Austro-Hungarian empire, Poland, the Soviet Union, and – finally – of an independent Ukraine.

The constant risk of betrayal

My mother had started making regular visits to Poland well before the fall of communism, but even after the collapse of the Soviet Union, a return to her birthplace seemed unthinkable. She had heard stories of banditry in post-communist Ukraine and feared a hostile reception from the villagers. No sooner had Poland regained its independence from the ruins of Austria-Hungary than it was fighting off Ukrainian nationalists for control of the region around Lviv – Lwów to the Poles, Lemberg in the days of empire. My mother’s uncles had served Austria-Hungary as cavalry officers, and took their place as landed gentry in the new dispensation, with Ukrainian peasant labour. But Polish independence was soon to be snuffed out once more, this time by the Molotov–Ribbentrop pact of 1939, which enabled the Soviet Union and Nazi Germany to partition Poland between them.

As a member of Poland’s Olympic Committee – he believed that if every town had an ice-hockey rink, it would contribute to world peace – my grandfather might have been on a Russian list of supposed persons of influence. Even if not, arranging the escape from Lviv of young Polish men of military age soon compromised him. He remained in prison when Hitler attacked the Soviet Union in June 1941, the city changed hands and the Nazis sought to eradicate the region’s substantial Jewish population. The best information the family could obtain indicates that he probably died of starvation or disease.

My grandmother and her daughters were also detained by the Russians, but were freed after a few weeks. At constant risk of betrayal, they fled. Lviv and Kolomyia were left outside Poland’s postwar borders, and my aunt and grandmother died without ever having seen their former home. My mother never gave up the possibility, however, making tentative contacts with intermediaries. It was the Eurovision song contest, of all things, that turned the project into a reality. Having won the previous year, Ukraine was preparing to host the 2005 edition, and visa requirements for British citizens were suspended for three months. This was the final cue for my mother to return to her birthplace at the age of 80, sixty-five years after she had left.

The sight of Ukrainian border guards in high-peaked caps identical to those worn by Soviet officers made her quail, but as we pressed on to Lviv, the greatest surprise for me was how the city had survived the savagery of the Second World War almost undamaged. From the punishing cobbles to the nineteenth-century architecture, it was as though the Austro-Hungarian empire had never disappeared. The same was true of Kolomyia, though for my mother the surprise was that her home village was only a few minutes away by car. Her memory was that the journey took the best part of a day, but of course that had been in a horse-drawn trap. More suddenly than she expected, we were at the gate of her former dwór (manor house). Until that moment she had had no idea whether it still stood.

The dwór, we discovered, had just been turned into a clinic after having been used as a wedding venue in communist times. “If you had come only a few months ago,” my mother was told, “it would have been almost the same as when you left.” Externally, however, little had changed, and next door the distillery founded by the family was still in operation. Far from showing animosity, people came up to kiss my mother’s hand as news of her return spread. “My grandfather was your family’s coachman,” one man told her. Another villager recalled that a wayward uncle had fathered a daughter with a local girl, but had compensated the family with a field, and paid for the child’s education. Then a white-coated clinician remembered that her grandmother used to look after my mother and her sister, and an extraordinary reunion followed.

In her youth my mother and her family would attend the Latin church, while the villagers adhered to the Greek Orthodox rite, which is in communion with Rome (explaining why Lviv at one time had two Catholic cardinals). Then the two communities barely mixed, but during her return my mother attended Mass in both Latin and Byzantine rites, and let it be known how happy she was that her old home was serving the community.

Time had dissolved old tensions between Poles and Ukrainians. So had Polish support for Ukraine’s Orange Revolution. But Russia is now exacting revenge for that turn towards the West. Though Kolomyia is in the farthest corner of Ukraine from the devastation being wreaked on the rest of the country, Ukrainian troops recently raided an Orthodox monastery near the town’s military airfield which had remained loyal to the Moscow Patriarchate, suspecting that someone within its walls was using a laser pointer to mark out targets.

I have left out certain details, such as my mother’s family name and that of her birthplace, in case the war reaches there. Vladimir Putin is fond of saying that borders can change, which the people of Kolomyia know all too well. But as Putin tries to extinguish their spirit of nationhood, the Ukrainians can draw inspiration from the way Poles kept theirs alive during the 123 years their country did not exist.

As for my mother, dementia has prevented any awareness of what is happening now. In this respect, if no other, that could be seen as a blessing.

Raymond Whitaker is a freelance writer and editor