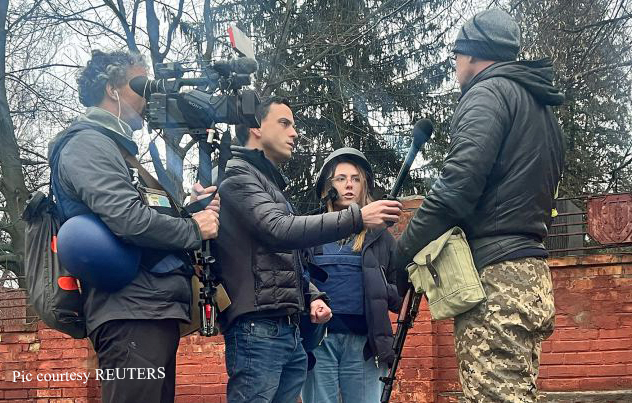 Tributes to the dedication and sacrifices of journalists covering the Ukrainian conflict have been paid at a service at the church known as the journalists’ church, St Bride’s in Fleet Street, London.

The former BBC Defence Correspondent, Caroline Wyatt, spoke of how vital the role of journalists was in providing true information in a conflict.

“One of the first acts of the Russian forces in Ukraine was to try to destroy the television transmission tower in Kiev. This absence of information in a blockade accomplished two goals,” she said.

“Chaos is the first. People don’t know what’s going on, and they panic. At first, I couldn’t understand why Mariupol fell apart so quickly. Now I know it was because of the lack of communication. Impunity is the second goal. With no information coming out of a city, no pictures of demolished buildings and dying children, the Russian forces could do whatever they wanted.” said Ms Wyatt.

“That’s why we took such risks to be able to send the world what we saw, and that’s what made Russia angry enough to hunt us down. I have never, ever felt that breaking the silence was so important.

“In the absence of information, with the phone and the internet cut off, after a while you’re no longer sure quite what to believe,” she said.

“We’ve long known that good journalism — eye-witness journalism – matters. And it matters most of all when covering war, when truth is hard to pin down and facts are disputed or even weaponised.”

On the personal costs to journalists themselves, Ms Wyatt said that what they witnessed in conflicts like Ukraine may haunt them for the rest of their lives.

“When our colleagues come home there’ll be a sharp disconnect. Days, weeks and maybe months when their thoughts and their hearts are still in Ukraine. Days when seeing their own child will bring back thoughts of another crying outside an apartment block gutted by shells, a home turned into a nightmare doll’s house in a world turned upside down.

“And the thoughts of many of our colleagues – as ours are today — will be of those journalists and crews who, in bearing witness to this conflict, have lost their own lives, leaving their friends and families asking ‘was their work really worth it?’ They should be in no doubt that it was, and it is. Ukraine is now the frontier at which the work of defending democracy has become – once again – a matter of life and death.

“In Moscow, state media are creating an alternative reality in which Putin talks of patriots and traitors, where police round up protesters, and Ukraine is reported to be bombing its own maternity hospitals and kindergartens.

“Our colleagues in Ukraine know that words and images matter in this war on European soil in the early 21st century. That language matters. That truth matters.

The Rector of St Bride’s, the Revd Canon Alison Joyce, spoke of the immense personal risk faced by media teams in reporting conflicts like the war in Ukraine.

“It has never been so readily apparent how imperative it is that we not only support them in their work, but also that we value and uphold the freedom of the press – because we are also seeing how easily violence is done to the truth when an oppressive regime takes control of the media.”