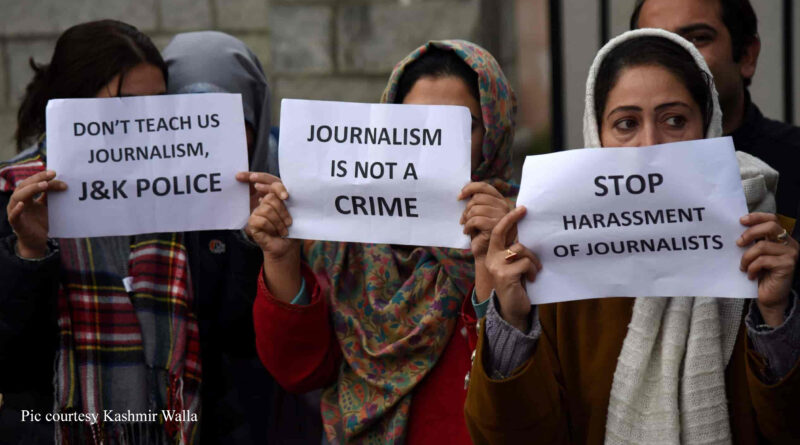 The Jammu and Kashmir administration in India and the security forces are doing themselves a great disservice by creating an extremely coercive eco-system for journalists in the Union Territory. Those administering the territory are rapidly losing out on the critical feedback that could make the system more stable.

An apocryphal story among journalists in Srinagar is that a senior official holds that of “five Ms” that are the ‘cause’ of the Kashmir issue – Masses, Mosques, Maulavis – Islamic scholars – Militants and Media, all have been tamed in the last one year except the media. People have been prevented from reaching out to the media as they had begun to do by staging protests outside Srinagar’s Press Colony.

Local journalists in Srinagar claim that they are routinely questioned about their sources and if they refuse to reveal them, their reports are dubbed ‘fake news’. They allege that the security forces often ask journalists to hand over their cell phones to examine their call records. This has curtailed source-based reporting in the Valley. Even the social media accounts of journalists are closely monitored and they are questioned about their posts even if they relate to public grievances.

This coercive attitude towards the media has been amplified by the recent arrest, bail and subsequent re-arrest of two journalists – Sajjad Gul and Fahad Shah. Gul, a trainee reporter with “The Kashmir Walla” news-site, was arrested on January 6 after he posted a video of a protest outside the home of a militant killed in an encounter with the security forces.  He was accused of misusing journalism to “spread disinformation and false narratives” on social media in a bid to make people “resort to violence”. When he was granted bail, he was promptly rearrested under the draconian Public Safety Act,  allowing the administration to keep him in jail without trial for up to two years.

Fahad Shah, editor-in-chief of “The Kashmir Walla” was arrested under the Unlawful Activities Prevention Act (UAPA) on February 4 for his social media posts termed “anti-national” by Pulwama Police. When he was granted bail on February 26 by the National Investigation Agency court, he was immediately arrested by police from another district, Shopian, in another case of provoking riots. A week later when he got bail, he was rearrested yet again, this time by Srinagar police on charges of defamation, public mischief and UAPA. On March 14, afraid that he would be granted bail, the police detained Shah under the Public Safety Act, a favourite mode by which the administration can avoid due judicial processes.

The Kashmir Times is a reputed newspaper whose editor took up an adversarial position on the Centre’s policy towards the erstwhile state. The paper was silenced by using the Estates Department to seal its offices in Srinagar and reopening income tax cases going back nearly three decades. The bank accounts of the newspaper and its editor were sealed. The editor is now occupied with attending courts every day and the newspaper is unable to print its hard-copy edition regularly.

These are not exceptional cases. Journalists are routinely summoned and questioned in the Kashmir Valley. Noted senior journalist Ashiq Peerzada of The Hindu had a case opened against him and was questioned by the Cyber Police over a report. Freelance photographer Masrat Zahra was charged by the Cyber Police for allegedly uploading “anti-national” social media posts. Such is the terror of the administration that apprehensive of being locked up, even author and journalist Gowhar Geelani was forced to go on the run after an arrest warrant was issued for not presenting himself to sign a bond committing to maintain peace.

A lot of learning in journalism takes place through interaction with one’s peer group as well as senior journalists. Instead of encouraging such interaction, the administration used a putative coup against the office bearers of the Kashmir Press Club to seal the club and take over the building which housed it.

Almost every journalist of repute complains of surveillance and monitoring by the state. Journalists are told not to report the version of the family members of victims/militants who are killed in encounters with the security forces. The extent to which the administration’s suspicion of the media is evident from the case of a journalist, who recalled being asked by an army officer before an interview “First tell me whether you consider yourself an Indian citizen or not.”

Simultaneously, the police and the security forces are apparently creating a new group of “influencers” on social media who target reporters working for the national or foreign media. The adversarial attitude of the administration is justified as preventing ‘misuse of journalism’ by militants. If the aim of the administration is to drain the swamp of misinformation and disinformation in a conflict zone, then it must ask itself whether this is the best of way achieving that goal.

Preparing background notes on journalists listing the name of their parents, siblings, spouses, bank accounts, property owned and often, even ideology, are clearly intimidatory tactics. These details are then used to categorise journalists so that the administration can decide whether to deny or give them access.

The best method of countering misinformation and disinformation is by setting in place a rules-bound and collaborative accreditation process to recognise serious journalistic practitioners, and easing their access to the administration. Yet in Jammu and Kashmir, especially in the Valley, the administration, suffering from a siege mentality, is shutting out journalists and using draconian methods to deal with inconvenient reportage. It is important that the “managed” news now emerging is displaced by news that is credible, evidence based and which highlights different facets of truth. The quest for one truth, one version and the promotion of fake normalcy by the J&K administration is destined to fail. An attempt at homogenising journalism to report only the official version of events will never bring normalcy.

The writer is an independent journalist based in Delhi. He was recently in J&K.