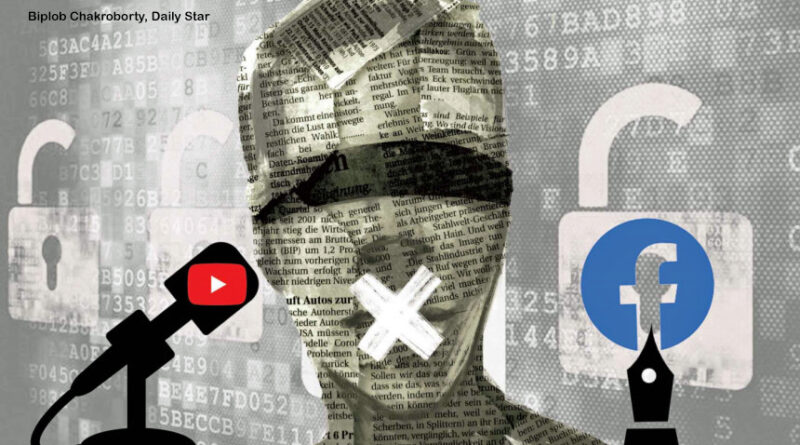 as an ally in democratic development,

Editor of Daily Star in Bangladesh

With the numerous laws that already exist to regulate – or better still, suppress – the media, and the diligence with which new ones are being prepared, one would think that of all the areas that need fixing, our government expects the journalists to be “fixed” first. But why? Why is there never an acceptance that independent media is the lifeblood of democracy, good governance, rule of law and accountability? Why is there no recognition of the fact that countries that advance into the rank of “developing countries” do so not only with higher GDP, but also with higher levels of human rights and all sorts of freedoms? Development cannot be just in economy, it must also be in society. It must be holistic to be meaningful.

Last Saturday, in a belated observation of the World Press Freedom Day, all the apex bodies of journalists, and those representing the owners and editors, jointly expressed concerns about the state of free press in Bangladesh, and the challenges before the industry as a whole.

Working journalists highlighted the issue of surveillance which has reached dangerous levels with the acquisition of latest listening and tracking devices by state agencies. Some of our district correspondents suffer a greater degree of surveillance than those in the cities—more direct and crude. They are sometimes told point-blank not to see some people and are called within minutes of their meeting with an opposition politician wanting to know what transpired. Sometimes, sources are called and warned against meeting certain reporters not in the good books of officials.

The occasional leaks in the public domain of personal telephone conversations of people that the authorities want to embarrass, or whose reputation they want to damage, prove the wide net of telephone tapping that goes on. During Prothom Alo reporter Rozina Islam’s detention by police, a telephone conversation between one of her female colleagues and the latter’s father became public. It was meant to show Rozina in a bad light, proving that both Rozina and her colleague’s phones were tapped. The question is, how many journalists’ phones are monitored? We assume that many editors’ phones are monitored, too. Is this operation authorised by anyone? If yes, then, by whom? Under what law? By what criteria are those under surveillance chosen? Or is it left to the whims of the officers concerned? What about privacy? What about the misuse of this practice? Is there any accountability? People in power now enjoy the fruits of this. When things turn around, they become its worst victims.

The defamation law is not only among the most frequently used but also one that is most abused. The law clearly states that only the person defamed can lodge a case, and that not more than one case can be lodged. In practice, literally anybody can lodge such a case claiming that, “I have been defamed because my leader was defamed”, or some such pleas. The tragedy is that the lower courts accept it, and also in more than one instance. Thus, journalists and/or editors are seen attending court hearings in all parts of the country and seeking bail. Thankfully, instances of defamation cases have reduced. However, only the day before yesterday, Bhorer Kagoj editor and publisher was subjected to a dubious defamation case.

Much has been written about the Digital Security Act and its devastating impact on the free media. Its harmful effects are becoming clearer on a daily basis, forcing our journalists and editors to practice self-censorship in order to survive. After relentless complaints and many reports by the international media bodies, our foreign minister admitted that “some excesses” could have occurred. More to the point, our law minister said that no journalist will be directly arrested under DSA and that they will be summoned first. We welcomed the proposal, as a first step, and expected that this would be followed by a directive from the home minister to every police station to that effect. To the best of our knowledge, no move has been forthcoming.

At the moment, three draft laws are in the pipeline—one deals with data protection, the second with OTT platforms, and the third with the service conditions of media employees.

The draft law for data protection has many good aspects, but the dangerous part is that law enforcement agencies have been exempted, with the result that they are free to use personal data in any way they want, flouting all the rights to privacy.

The draft law for OTT platforms is designed to put serious restrictions on artistic creativity and freedoms of thought and expression.

The draft law meant to ameliorate the service condition of media workers ends up doing the exact opposite. As for service conditions, it basically repeats what already exists, like the wage board, etc. However, much to our concern, it introduces hitherto non-existent media courts to be set up in every district. They will be added to by media appeals courts at higher levels. The function and purpose of such courts remain totally unclear. We in the media feel—and here the editors, owners and working journalists’ unions are all in unison—that this law is a “medicine more harmful than the ailment”, and will entangle the media into complex and intricate legal battles. There are numerous provisions for enhancing bureaucratic interference in the operation of media houses through obligatory reporting, which is totally contrary to the operation of industries in the private sector.

The time has come for a total change of mindset—instead of always looking at the media as the “enemy” that needs to be controlled, or at least kept under surveillance, it should be seen as an “ally” in the democratic and development journey that Bangladesh is well embarked on.

I want to conclude by quoting Manzurul Ahsan Bulbul, a senior journalist and union leader, who recently said, “Doing journalism in Bangladesh today is like swimming in a pond full of crocodiles”. We may be able to swim around them for a while, but when any one of them will devour us, we don’t know.