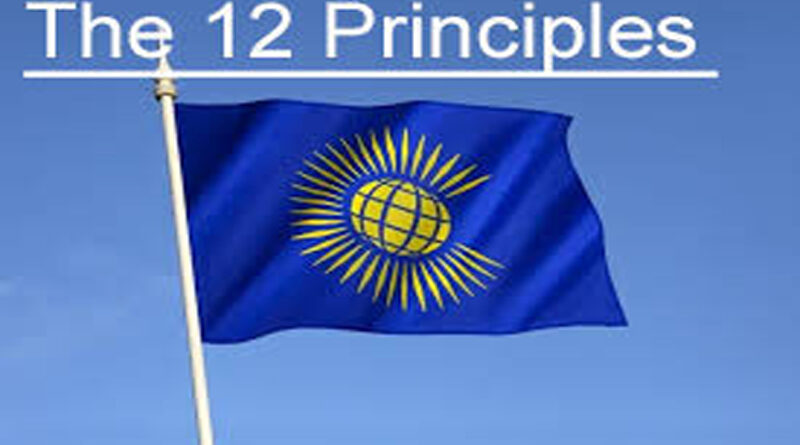 stance before a Law Ministers’

This autumn will see a historic moment in the Commonwealth’s story which, if well handled, could stem negative talk about the organisation’s irrelevance. Member governments should seize this chance to adopt a meaningful set of commitments on safeguarding the role of the media in informing the public and holding the powerful to account without fear of reprisals. After a delay of many months, it has been decided that from November 22 and 25 Commonwealth Law Ministers will meet, in Mauritius and online, to discuss important legal issues including the first official Commonwealth Principles on the role of Freedom of Expression and the Role of the Media in Good Governance.

The prospects appear favourable. The communique that came out of the CHOGM summit in June stressed the importance of “free, independent responsible and pluralistic media” to democratic processes, and  noted the “important ongoing work” by the so-called Expert Working Group (EWG) of member states which last year reviewed the 12-point set of Media Principles published in 2018 by the CJA, the Commonwealth Lawyers Association (CLA) and four other Commonwealth-accredited organisations – The 12 Principles: A new code is proposed for freedom of expression and the role of media in good governance across the Commonwealth The resulting, revised, Principles text and the EWG’s recommendations to ministers about what action will be taken on them have not yet been made public.

The decisions that are taken will be crucial —  in some cases a matter of life and liberty – for journalists in parts of the Commonwealth where they feel unprotected and have been targeted on account of their scrutinising role on behalf of the public. In 2017 the Commonwealth Secretary-General, Patricia Scotland, publicly voiced support for “distinctive Commonwealth principles on the media in line with the normative framework of international human rights law.”

As the decision time comes close, the CJA’s Executive Committee has met to consider these things. We call for three actions that we believe are vital to counter a surge in violent attacks and intimidation against media workers which the Secretary-General herself has described as shameful. They are that:-

1.       The Commonwealth adopts a set of principles on the role of the media in democratic societies that are properly consistent with internationally agreed standards of protections in law and practice;

2.       A small number of desired improvements to the proposed text which were communicated in writing by Commonwealth accredited organisations to the Secretariat in November 2021 should be considered for inclusion. The reservations expressed by concerned civil society groups should be acknowledged as a matter of public record; those concerns relate to fundamental safeguards for independent journalism including protection of sources, repeal of arbitrary laws and practices, and acceptance of the key role of independent oversight bodies in sustaining functioning democracies.

3.      Member states should undertake to establish meaningful ways of ensuring oversight and remedial measures against systematic constraints on civil society and the media, so that respect for the Principles can be measured and upheld. The Commonwealth professional organisations which authored the original Media Principles document in 2018 have offered their expertise and networking capacity to enable an open and action-oriented dialogue with member states for this purpose.

Commonwealth organisations including the CJA and the Institute of Commonwealth Studies frequently organise public events to raise awareness about the surge in recorded cases of fatal attacks, violence and abusive harassment directed at journalists. Yet the institutional Commonwealth remains silent. Topical examples include the protests of journalists’ organisations in Bangladesh against the consequences of the Digital Services Act,  https://carnegieendowment.org/2021/12/09/how-bangladesh-s-digital-security-act-is-creating-culture-of-fear-pub-85951 which critics say gives law enforcement the power to arrest anyone and search any premises without a warrant on the mere suspicion that a crime has been committed using social media. Many hundreds of journalists have faced criminal charges under the DSA without meaningful recourse to legal defence.

Topical examples include the protests of journalists’ organisations in Bangladesh against the consequences of the Digital Services Act, which critics say gives law enforcement the power to arrest anyone and search any premises without a warrant on the mere suspicion that a crime has been committed using social media. Many hundreds of journalists have faced criminal charges under the DSA without meaningful recourse to legal defence.

Against this background the CHOGM in Kigali, Rwanda, in June was a focus of intense interest for Commonwealth civil society organisations which want their governments to act decisively to roll back the many and growing threats to democratic governance and the protection of fundamental rights in member states. Anne Gallagher, who heads the Commonwealth Foundation — the organisation’s agency for civil society — pointed out that: Over 80% of the Commonwealth’s 2.4 billion citizens are living in what Civicus classifies as ‘repressed’ societies: countries where public protest is banned or severely curtailed; where human rights defenders and journalists are intimidated and detained; where laws censor vital information and restrict media freedom; where the institutions of governance protect those who abuse their power and fail to defend those who challenge such abuses.

Remarkably, during a meeting in Kigali of ministers and invited representatives of civil society, the Foreign Minister of Jamaica, Kamina Johnson-Smith, was heard to make a powerful appeal for the Commonwealth as a whole to demonstrate its recognition that “unimpeded journalism” is essential to cast light on the dark corners of society and deter corruption.

The frustration at the organisation’s turning of a blind eye to the erosion of  democratic norms in member countries was apparent at the pre-CHOGM Commonwealth Peoples Forum session devoted to freedom of expression and the Commonwealth Principles on the role of Freedom of Expression and the Role of the Media in Good Governance. A woman journalist from Ghana spoke bitterly of a growing climate of hostility and constraints against press freedom. Despite the rhetoric about “freedom of expression”, she said, journalists in her country were fearful about their “freedom after expression”.

She may have had in mind the 2019 murder of journalist Ahmed Hussein-Suale https://www.bbc.co.uk/news/world-africa-47002878 , part of an undercover investigative team whichexposed high-level corruption in African football. Hussein-Suale became the target of a vicious public campaign of threats and vilification, and was gunned down near his home in a mafia-style killing. No suspects have since been identified.

At the meeting with Commonwealth ministers the president of the Commonwealth Lawyers Association, Brian Spears, bluntly called on the ministers to “get a move on” in approving the Media Principles. He reminded them that the Principles document had first been put forward as a blueprint for the Commonwealth as many as four years ago, as part of a remarkable collaboration among six civil society networks representing members across the world.

The Commonwealth Journalists Associations and like-minded organisations are not hostile to the Commonwealth.  We believe that to be credible the organisation must live up to its public commitments in action, not just on paper. Its 2013 Charter, issued in the name of its people, acknowledged the ‘surge in popular demand for democracy and human rights’. Today it has become clear that the Commonwealth wills the end but not the means. That cannot endure.

Eleven years ago, in 2011, the member states decided collectively to expand the mandate of the Commonwealth Ministerial Action Group (CMAG) https://thecommonwealth.org/commonwealth-ministerial-action-group  to act as a “custodian” of Commonwealth values. It was empowered to take action against “unjustified postponement of elections, egregious violations of human rights, the undermining of the judiciary, lack of space for the opposition, and systematic constraints on civil society and the media.”

That has not happened. On May 27 this year, at a high-profile public event  https://commonwealth.sas.ac.uk/events/commonwealth-working  in the run-up to the Commonwealth summit, the Assistant Secretary General of the Commonwealth, Professor Luis Franceschi ,was questioned about the perceived inaction of CMAG. He replied that with regard to media and civil society issues, action by CMAG was only to be seen as “a last resort”.

It is not enough. Civil society is declared to be the Third Pillar of the Commonwealth beside the member states and the Secretariat. It is surely high time for the “institutional Commonwealth” to open its eyes – and its active mind – to the legitimate expectations of the people, in whose name the Commonwealth Charter was proclaimed.