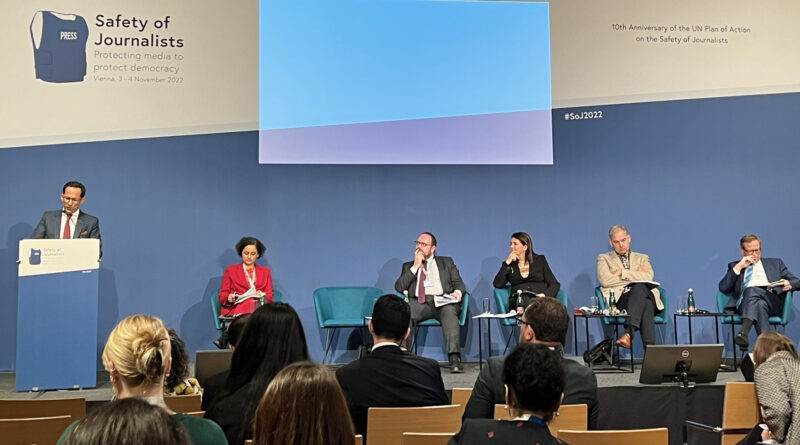 By CJA Executive Committee member and International Director of the Centre for Freedom of the Media, WILLIAM HORSLEY

Years of inaction by Commonwealth governments in response to violent assaults and excessive restraints on the work of independent media in the organisation’s 56 member states came under sharp scrutiny at a major United Nations conference in Vienna on November 4. Leading human rights lawyer Can Yeginsu, a deputy chair of the authoritative High Level Panel of Legal Experts on Media Freedom, https://www.ibanet.org/IBAHRIsecretariat described as “absolutely unacceptable’ the 96 percent rate of impunity (failure by state authorities to bring perpetrators to justice) in Commonwealth countries in cases that involve killings of journalists.

He said the Commonwealth Law Ministers meeting on 23 November presented “a fantastic opportunity for the Commonwealth, because 96% is absolutely unacceptable in terms of impunity for that bloc”. He recalled that in 2018 detailed proposals were first put forward for a set of Commonwealth Principles on the media and good governance thanks to the coordinated efforts of six professional networks of Commonwealth journalists, lawyers, parliamentarians, human rights advocates and researchers. http://commonwealthjournalists.org/2018/06/10/the-12-principles-a-new-code-is-proposed-for-freedom-of-expression-and-the-role-of-media-in-good-governance-across-the-commonwealth/

A partially amended version of the 2018 Media Principles emerged after member states agreed to review and revise the original civil society-drafted text following a 4-month online consultation process and review by government delegates in late 2021. After six years of persistent advocacy and awareness-raising efforts by Commonwealth grass roots organisations, the Law Ministers are due to consider for approval the newly-revised Media Principles document during their meeting in Mauritius from November 22 to 25.

UNESCO, the lead UN agency for freedom of expression and media, maintains an Observatory of Killed Journalists https://en.unesco.org/themes/safety-journalists/observatory which has documented as many as 200 targeted killings of journalists in Commonwealth states since 2006. Most cases involved journalists who reported on politics, crime, corruption or human rights abuses. Many suffered abduction, non-fatal attacks or torture as well as publicly-known threats to their safety before they were murdered.

The High Level Multi-stakeholder Meeting  in Vienna https://events.unesco.org/event?id=802253330 earlier in November was co-hosted by UNESCO, the UN’s Human Rights Commissioner and the Austrian government. It marked 10 years since the launch of an ambitious UN Plan of Action on the Safety of Journalists and the Issue of Impunity. The Vienna gathering took stock of governmental actions to protect journalists from violent attack and punish those responsible; gathered recommendations from NGOs, regional experts, monitoring groups and academics; and began the work of setting new priorities for coordinated actions by all stakeholders in the coming years.

The High Level Panel of international lawyers was set up as an independent advisory body in 2019 https://mediafreedomcoalition.org/ under a UK and Canada-led initiative which also launched a global Media Freedom Coalition of states publicly committed to reversing worldwide trends towards repression and violence against independent media as well as “cultures of impunity”. In Vienna, UNESCO announced that the overall global rate of impunity now stands at 86 percent.

Yeginsu and other members of the High Level Panel of legal experts spoke in Vienna after hearing powerful and often searing testimony from prominent journalists and activists at high risk in Pakistan, Russia, Belarus, Eritrea, Mexico, Malta, and other countries where journalists’ murders have gained public attention. Looking forward, Can Yeginsu said a strategic objective of the High Level Panel would be to “get some states to lead on this issue”, in order more effectively to counter a tide of killings and other acts of intimidation targeting journalists for their work.