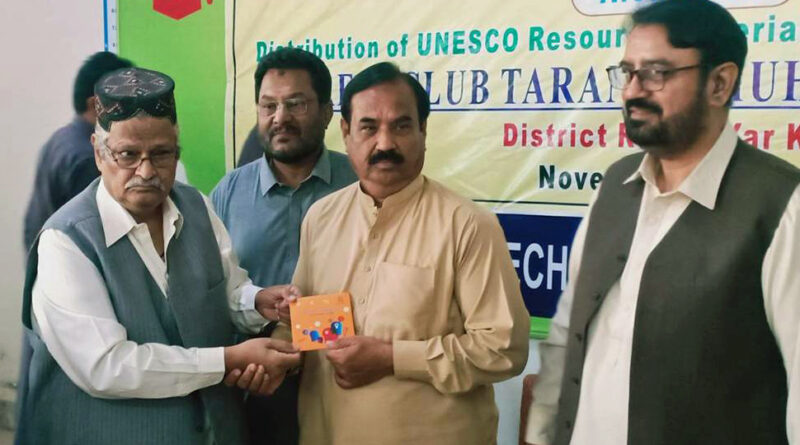 The Pakistani press freedom and training organisation, Rural Media Network Pakistan, celebrated International Day to End Impunity for Crimes against Journalists with a journalists’ safety seminar, attended by academics, political leaders and civil society activists, at the Government College of Technology in Mohsinabad.

The RMNP Coordinator, Muhammad Suleman Farooqi, said the international day was proclaimed in a UN General Assembly resolution commemorating the assassination of two French journalists in Mali 2013. The resolution condemns all attacks and violence against journalists and media workers. He said Pakistan was one of the most dangerous countries for journalists – seven had been killed in the first 10 months of 2022, and that the main obstacle to justice was often a lack of political will.

Mr Farooqi said the dangers to journalists were related to threats from feudal leaders, extremists and corrupt politicians. Many had also faced difficulties with the police, facing trumped-up charges and being forced to pay fines and bribes. These problems were made worse by having limited resources and the lack of training. He praised the UN Plan of Action for the safety of Journalists, and UNESCO, for their part in trying to protect journalists.

The prominent educationist and author, Syed Tanveer Bukhari, told the seminar that most of the journalists killed in the line of duty in Pakistan since 2000 came from rural areas and small towns. He said they faced some of the toughest working conditions in the world, especially those in the tribal, rural areas of the country. Many were untrained, but they carried out work in areas of the country from where more established Pakistani journalists felt unsafe to report from.

“As such, their work is invaluable and provides information and insight from a part of the world which would otherwise remain uncovered. Through their work alongside tribal leaders and religious extremists, it is no surprise that these media workers often find themselves in extremely difficult and dangerous situations,” said Mr Bukhari.

He stressed the need for impartiality in conflict reporting, which created an environment of dialogue and debate, while bringing various quarters together to resolve an issue peacefully. He added that journalists are increasingly becoming a target of violence, as they were pulled into the conflict. He said he believed that the UN Plan of Action for the Safety of Journalists could not yield positive results in Pakistan, because the prevailing environment was still not media-friendly both in urban and rural areas. He expressed his deep concern over the attacks on media in Pakistan where impunity remains rampant.

Hameedullah Khaz Aziz, an editor, told the seminar it appeared that attacks could be be made on the media with impunity.

“This is happening as journalism comes under increasing pressure from governments and intelligence agencies with no interest in a free press, and from populists who smear independent journalists as enemies of the people. These developments are putting journalists in greater danger. The need to stop impunity and ensure consequences for those who attack journalists has never been more urgent,” he said.

The President of the RMNP, Ehsan Ahmed Sehar, said journalists uncovered truth and held the powerful to account.

“They bring critical news and information that makes our societies safer and our democracies stronger. Yet this work comes at great risk. Journalism has become one of the world’s most dangerous profession,” he said.

He told the audience that that 135 journalists and media workers were killed in Pakistan between 2000 and 2022, most of them from rural areas and small towns. Due to this alarming situation, Pakistan was identified as one of the five pilot countries for the implementation of the UN Plan of Action for the Safety of Journalists and the Issue of Impunity, which addresses fundamental aspects of prevention, protection, and prosecution.

Mr Sehar said UNESCO co-operated with the Pakistan government, media houses, professional associations, NGOs and other stakeholders to end Impunity. He also shed light on the ambitions of the UN Plan for Raising Awareness, Standard Setting and Policy Making, Monitoring and Reporting, Capacity Building, Research and Coalition Building. He said UN agencies, especially UNESCO, had done a lot of work during last ten years towards achieving these goals.

He recalled that UNESCO approved the first journalists safety project in Pakistan in 2010, under which more than one hundred journalists were trained, and that later, with the support of the Doha Centre for Media Freedom, one dozen training workshops were organised in areas where journalists were working in a hostile environment.

For video coverage of the RMNP seminar visiut these links: