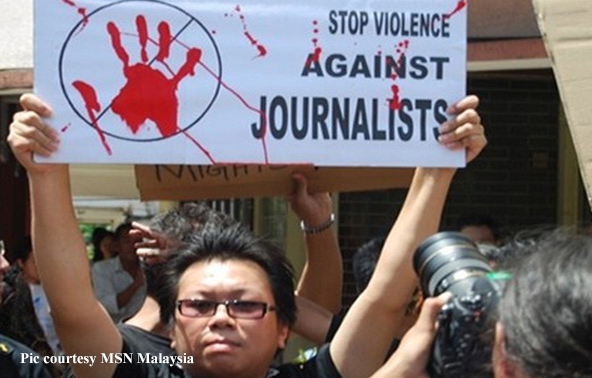 A comprehensive summary of media freedom throughout the Commonwealth has been published by the Commonwealth Foundation, and it reaches some damning conclusions. The report was released as the Foundation held a major online conference, promoted as a Critical Conversation intended to build alliances and understand strategies and approaches that can be used to make meaningful progress on the issue of media freedom.

Issues debated included Why does media freedom matter and how can it best be protected? What are the current global standards? Is the Commonwealth meeting those or falling behind? and What mechanisms can be put in place to monitor the safety of journalists and protect media freedom?

Speakers included Kanbar Hossein-Bor, Deputy Director Democratic Governance and Media Freedom Co-ordinator at the British Foreign, Commonwealth and Development Office; Judge Chile Eboe-Osuji, International Jurist at the Lincoln Alexander School of Law at Toronto Metropolitan University; Sneh Aurora, a human rights advocate and Executive Director of the London office of the Commonwealth Human Rights Initiative; Corinne Vella, the sister of the murdered Maltese campaigning journalist Daphne Caruana Galizia; and Dionne Jackson-Miller a journalist, attorney at law and a tutor in Constitutional Law at the University of the West indies.

The Media Freedom Summary, issued at the same time, states that between 2012-2022, 19 Commonwealth countries saw their media freedom environment slide substantially, more than 10 places in the rankings..  In 2016-2022 this figure had narrowed to a decline in 14 countries, comprising 29% of the total 180 surveyed worldwide. Over the same period, 11 improved by the same criteria (23%), whilst most saw little sustained improvement.

Of the 960 journalists murdered worldwide since 2012, 143 lived in Commonwealth countries. The impunity rate across the Commonwealth — the rate at which these crimes go unresolved — is 96%.

The report states that Commonwealth societies also reflect the general decline of trust in news. The wide range of both covert and overt threats to media freedom reflect global trends towards authoritarian state controls and suppression of independent media.

According to the report, press freedom and freedom of expression across the Commonwealth face hostile conditions related to threats and acts of violence, official pressure, partisan political interests and religious fervour convictions, as well as poor employment protections. Journalists and bloggers often suffer from unlawful surveillance as well as aggressive cyber harassment and denigration by government and political interests, seeking to dominate media space and ownership. In highly charged political environments, particularly at the time of elections, the civic space in which journalism operates is further constrained. There are grave issues around impunity, utilization of repressive legislation, and lack of protections against online harassment.

Although the evidence across the Commonwealth points to a decline in politically motivated killings, there has been a sharp rise in non-lethal violence and harassment. Systematic data about levels of online abuse is not readily available, but global trends show this is increasing.24 Similarly, there is no summary data on how many Commonwealth journalists have been forced into exile because of intimidation and abuse.

Areas of prime relevance and concern relate to

The data above underlines the necessity of Commonwealth actions to ensure accountability, legislative review processes, and implementation of commitments. This is against the background of a marked consolidation of UN international standards and commitments, which expect the Commonwealth to adhere to the protection and promotion of human rights standards. The currently published Commonwealth Principles have been revised in draft, but guidelines related to protections in areas of prime concern must meet international standards.