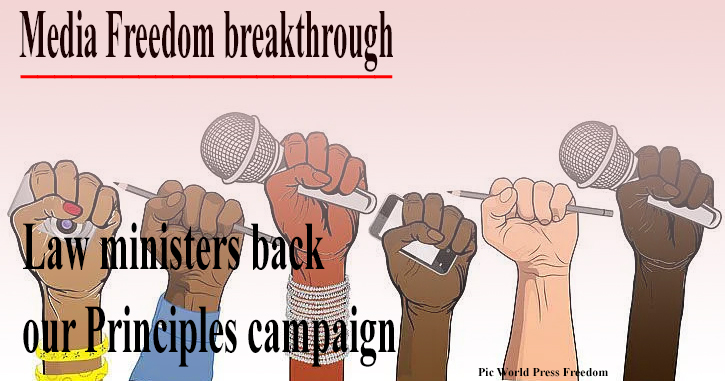 Commonwealth Law Ministers have unanimously agreed to recommend a newly-revised set of Commonwealth Principles on Freedom of Expression and the Role of the Media in Good Governance https://tinyurl.com/32jawnpc to Commonwealth Leaders to consider at the next Heads of Government Meeting.

The breakthrough came at a Law Ministers meeting in Mauritius, and follows years of campaigning since the drive for a set of media freedom principles was born at a CJA conference in London in 2016. A committee set up to build on existing commitments on the safety of journalists made contact with lawyers, parliamentarians and human rights advocates. The aim was to establish a code of conduct, which became known as The Twelve Principles.

At their meeting in Maurtius, Ministers expressed gratitude to the Commonwealth Accredited Organisations for their hard work, dedication and valuable contribution to and development of the Draft Principles and also thanked the Expert Working Group of member states for valuable contributions to reaching an agreement. The Expert Working Group, which was chaired by a representative of Jamaica, met over a period of several months in 2021. It considered and partly revised the original text of the Commonwealth Principles document which was first put forward in 2018 by the CJA and five other Commonwealth Accredited Organisations.

Welcoming the consensus, the Secretary-General, Patricia Scotland, said the role of the media in a modern democracy was indispensable.

“Our Commonwealth Charter affirms that freedom of expression, including media freedom, is essential to the flourishing of democratic societies and a basic condition for development.  An important role of the Commonwealth is to help to build consensus among our members on the vital issues that they face,” she said.

“By realising the values and aspirations of our Charter across all the countries of the Commonwealth, we will deliver political, economic and social systems and services which are robust, effective and fair, resulting in reduced demands on justice systems in the future.”